Two major Washington onion operations provided us with great crop and company updates this week, and we’re happy to share the news that onions are coming out of the Eastern region now.

Cody Anderson with L&L Ag Production based in Connell told us on July 29, “We’ve been harvesting our early crop in Pasco for a couple of weeks now and have been pretty steady. Warmer weather this week has helped finish these onions well. The rest of our onions have been progressing well and have had largely good growing weather most of the summer.”

He continued, “The USDA announced a third round to their Food Box Program and we’re looking forward to supporting that program through a number of our customers.”

Along with Cody’s assessment of the new season, we learned from Brenden Kent of Sunset Produce LLC in Prosser that overall Washington State onion acreage is down this year, and he said on July 23 that the new season’s crop should be “very manageable.”

He also said on July 23, “We will start packing yellow and sweet onions next week, and we should have white and red onions the following week.  All of our onions will be direct-seed, and the quality looks good so far.”

Like most NW onion shippers, Brenden said the new crop is showing good quality. He said, “The crop in Washington looks pretty good so far. We do have a way to go before we begin harvest on our storage onions, but we are optimistic that the crop will be good.”

Both L&L Ag and Sunset Produce are multi-generational family operations and bring decades of experience to their onion farms and packing facilities.

Sunset Produce was formed by brothers Robert and Duane Munn and after 11 years of growing onions in Idaho-E. Oregon, it moved to the Prosser area and began its Eastern Washington onion production in 1976. With the brothers’ operations, R. Munn Farms and Duane Munn & Sons Farms, four generations are now included in the production roster.

And progress continues on every front.

Over the last year, Brenden said, Sunset Produce has upped the technology in the packing shed. We don’t have any new products or personnel to report at this time.

“Even though there are many challenges out there regarding COVID-19, we have to remain diligent and optimistic for the future. Oftentimes good things can come out of a bad situation, and I believe that the enthusiasm to buy U.S. products has never been higher. I also believe that there could be some overseas markets open up for us as a result of this pandemic.”

Brenden said, “We could have a bumpy ride this fall, but I remain optimistic for the future of the onion business.”

History and family are also key at L&L Ag Production, Cody said. L&L Farms was originally created in 1980 as a partnership between Larry and his wife, Lorraine Bauman, and their oldest son, Kerrick Bauman. It was renamed L&L Ag Production in 2007. Initially focused on growing seed products, the operation began growing storage onions in 1988, and over the years the onion acreage has expanded.

In 1996 Target Ag Production was formed as the onion storage and packing arm for L&L Farms, and in 2003 Onions Direct was launched as a direct sales arm that provides year-round supplies to customers.

In addition to services, the operation has also expanded with personnel. Larry and Kerrick are the Bauman component, and Cody said there are other families with multiple generations that are part of the company.

“Our crew includes a father and son-in-law, several sets of cousins, and now a grandfather and grandson are all involved in our operation,” he said. “As one of the younger men on the farm, it has been invaluable to me to be learning from those with decades of experience – some who have been with the Baumans since their first onion crop in 1988.”

He added, “Combined, we have over 250 years of onion growing-experience across our production team. Some individuals have nearly 40 years, and others come with one or two under their belt. We pride ourselves in our work and that is something that spans generations. The L&L standard has been set, maintained, and continues on with the third generation now joining the fold.”

View photos of L&L Ag Production owners and staff. Click on the gallery for individual names. 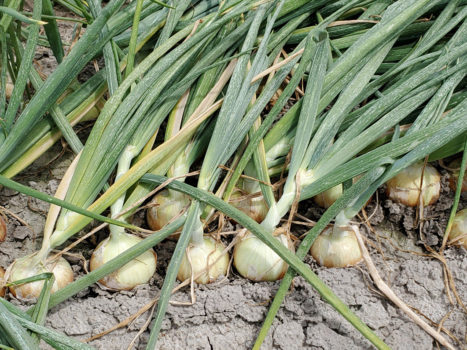 Logistics perspective: You Paid How Much?

NOA embarks on next journey with New Foundations