In an onion double feature, the Bayer Crop Science/Nunhems team has showcased both a tearless sweet at two booths during PMA Fresh Summit AND also demonstrated the solid performance of Joaquins in the Treasure Valley of Idaho-Eastern Oregon.

The tearless Sunions, billed as “America’s first tearless and sweet onion,” was rolled out at PMA Fresh Summit in New Orleans Oct. 19-21 in both the Bayer Crop Science and Onions 52 booths. According to Sunions breeder Rick Watson in a prepared release, the new variety comes out more than three decades of research and development and decrease in pungency during storage and is available from Onions 52 in Syracuse, UT.

Following PMA came the annual Nunhems/Bayer CropScience Onion Showcase, which was held at Nunhems Parma facility on Friday, Oct. 27. According to OnionBusiness.com’s Sherise Jones, organizers couldn’t have asked for a more beautiful fall day for the outside event, and attendees saw bin after bin of onions from the Story Farms seed trials. 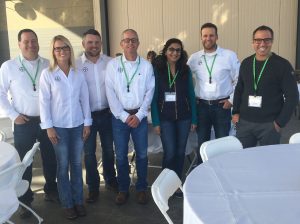 Southerland provided an overview of the trials, noting that Larry Story had related this year’s trials had the latest planting date ever and were harvested late as well, some coming in as far into the season as of Oct. 4.

Ashley said that much of the seed planted in the trials produced smaller than average onions, but the Joaquin seed variety stood out.

“The Joaquins finished nicely with 818 per cwt,” she said. The average was 728 per cwt.

As part of the showcase, Nunhems provided a great catered lunch and offered prizes that were raffled off to growers. An Apple iPad, Yeti cooler, a bucket of seed and a slew of pies were awarded to the winners. 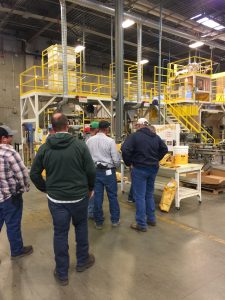 The program included a facility tour that followed an enlightening marketing presentation by Don Goodwin, founder and president of Golden Sun Marketing based in Minnetrista, MN.

During his presentation, Don explained how online grocery shopping is changing the landscape of retail. He said Amazon will have a big impact on the way consumers shop, which may ultimately cause upwards of 3,900 supermarkets nationwide to close.

“The value-based stores like Walmart will not suffer greatly,” Don said. “And the higher-end stores that offer a shopping ‘experience’ should be fine. But it’s the mid-line stores that will need to compete with internet grocery shopping trends.”

Don qualified that the numbers he is seeing could be wrong, but he said some reports grouping shoppers into categories are worth developing marketing strategies for. He noted Millennials drive food buying trends across the board, but there are other groups that should be closely watched. 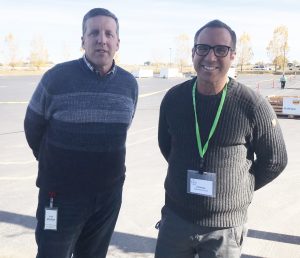 Goodwin mentioned statistics that say 23 percent of consumers could be categorized as the “Forever Young” group. These are young people obsessed with consuming large amounts of protein. These consumers are generally not loyal to a particular brand, but they want fresh food packed with the benefits of protein.

Another group is having a significant impact on marketing, and they believe the concept of “Rejuvenation.” Generally speaking, Don said, these consumers believe farmers are ruining the land. Where these consumers are concerned, onion promotions and marketing strategies should include more information about what growers have been doing for sustainability.

Goodwin also cited reports that show that 40 percent of consumers care about what growers and marketers do beyond farming. This desire to get to know people is a direct reflection of the dislike by consumers for corporate farming. Making the people connection can really make a difference when consumers go to buy, he said

Finally, Goodwin said there is an increased focus on urban agriculture. Rooftop gardens, hydroponics, and greenhouse growing are on the rise, and consumers are gravitating to produce growing with these techniques.

“This may not have much effect on onions,” Don said. “But the Salinas Valley may be majorly impacted over the next 20 years.

At the conclusion of the showcase, Southerland urged growers in attendance to provide feedback on the showcase and this year’s date change.

“Ultimately, this is your showcase,” she said. “We are committed to making the very best for our growers, so please let us know how we can make this event better moving forward.”

Check out the photos from the event. First group: Showcase and Luncheon

Check out the photos from the event facility tour

conditioning’ picture of the packing area where seeds are placed in “Nunhems” brand packaging, cans, foil pouches, or buckets ready for sales
picture of equipment used to size seeds into size categories prior to enhancements or sales
picture of color optical sorters which remove seeds with color variability or defects
picture of a gravity table where during the conditioning process seeds are separated from debris and other inert particles
picture of the germination lab where seeds undergo rigorous testing for quality several times throughout the conditioning and enchancement process prior to being sold
After PMA debut of Sunions, Bayer Crop Science and Numhems prove Joaquins a winner at Parma Onion Showcase was last modified: November 16th, 2017 by Onion Business
BayerNunhemsSeed Trials
0
Facebook Twitter Google + Pinterest
previous post 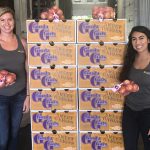