Interview photos are included below.

The 2017 PMA Foodservice Expo held July 30 in Monterey, CA, received favorable marks from those in attendance despite the ongoing construction at the Portola Plaza, where the event has traditionally be held.

OnionBusiness President Sherise Jones said. “The comments were all good from shippers we talked to during the show, even though the Portola Plaza was still in a complete disarray,” Sherise noted.

“Originally host hotel Portola Plaza had anticipated having both expo halls open to exhibitors,” Sherise said. “But in the months leading up to the event, the largest hall remained inaccessible, and exhibitors were moved to a tent outside the hotel.

“Free access to the Portola was blocked by construction, and educational sessions were moved to the neighboring Marriott Hotel, which lessened the easy flow, but apparently that didn’t keep expo visitors from taking advantage of visiting booths. Of course, this is not surprising as expo admission ranged anywhere from $1,000 to $1,500 per person, depending on how the ticket was purchased.”

She said that most shippers told her visitor traffic was heavy during the expo, especially during the first several hours of the show.

“Some commented that traffic died down during the final hours, but exhibitors were still happy,” Sherise said.

OnionBusiness was able to visit with onion exhibitors, but Sherise also said that a number of onion industry pros in Monterey during the weekend did not exhibit but were there for the great networking opportunities surrounding the expo event and educational sessions.

Nick Fullmer with Rigby, ID-based Rigby Produce told OnionBusiness that exhibiting at the PMA Foodservice Show is beneficial for the company because it allows the sales group to network with customers.

“Actually, this has been one of our best shows ever,” Nick said. “We have had some great new inquiries during the show as well.” Regarding Rigby’s onion program, Nick told OnionBusiness, “We are really looking forward to new crop.”

Lori Payne with River Point Farms in Herminston, OR told OnionBusiness that the PMA Foodservice Show presents a good opportunity to coach and educate customers.

River Point’s Stefan Matheny added, “Our prime location is great. We have been very busy today.”

Steve Gill with Gills Onions in Oxnard, CA, also told OnionBusiness that the PMA Foodservice Show is one of the most important for Gills.

“To be honest, the traffic was overwhelming at the start of the show,” Steve said. “I am sure that’s partly because we have one of the best booth placements in the expo.”

Gills was located in the big tent outside the Portola in one of the first booth locations at the entrance. “The quality of the customers that came through is very, very good too,” Steve said.

Dick Thomas with Potandon Produce told OnionBusiness that the show was “outstanding” this year. “We have been especially pleased to talk about our onion program this year,” Dick said. “Being able to share all the exciting news about the Baker & Murakami merger and new line is important for us to jump-start the new Idaho-Oregon season, and we couldn’t be more pleased to use this event to get the word out.”

Sherise ran into Larry Bauman, representing Onions Direct, on the show floor where he was making his rounds to onion booths. “The networking here is great,” Larry said. “If you are interested in making serious connections, PMA Foodservice is the place to be.”

Shay Myers’ family company, Owyhee Produce in Nyssa, OR, exhibited in the expo for the second year, with the booth display including onions and mint oil and focusing on Owyhee’s pickled asparagus line. Shay, along with his sister, Bailey, and staff members provided pickled asparagus samples and received the Second Place “Best in Show” award from PMA.

In addition to the networking taking place inside the event hall, it could be argued that an equal or better amount went on outside the expo halls. Sherise said she ran into numerous onion professionals who were meeting customers for private dinners and social events.

Many onion sales people and staff members enjoyed the Sysco and Pro*Act barbecues, both held on Friday, July 28, as well as one notable private onion function that was held Sunday morning prior to the expo.

A sumptuous brunch was hosted at the Montrio Bistro by the Idaho-Eastern Oregon Onion Committee and Southwind Farms, and the Committee reported the highest attendance in the four years of the event, with guests exceeding 120. 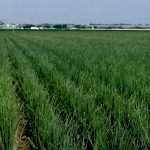 Market and Crop Update for August 3