Among the U.S. attendees of this year’s show in Guadalajara from March 16-18 are administrative representatives from the Idaho-Eastern Oregon Onion Committee.

ANTAD is described as “Mexico and Latin America’s largest food and supermarket show,” and a significant amount of U.S. product is sent to retail to the south of the States.

Stats show that in 2014, U.S. exports of consumer-ready food products totaled $9.2 billion, an increase of 12 percent from 2013 and a new record high. Right now Mexico remains the second-largest export market for consumer-ready products from the United States.

The 2016 Expo features 2,400 exhibitors, most of which are Mexican-based companies that market to grocery chains. These companies’ products cover a broad range that includes equipment, software, pet food, soft drinks, tobacco, cosmetics, insecticides, and canned, frozen and fresh foods, to name a few.

A modest number of U.S.-based exhibitors are participating. The U.S. Agricultural Service has a pavilion that showcases approximately 40 companies, including promotion organizations for a range of food items such as soybeans, seafood, popcorn, poultry and eggs.

The event’s strategic partners are heavy hitters like Visa, Coca-Cola, HP, and Home Depot, and retailers that attend are also heavy hitters — Costco, Walmart, Sam’s, and Smart and Final.

Despite Mexico presenting travel safety concerns and despite warnings of violence related to citizen carjackings and kidnappings in the Guadalajara area, the event location is deemed safe if precautionary measures are taken to ensure individual safety. For more information on travel safety, visit https://travel.state.gov/content/passports/en/alertswarnings/mexico-travel-warning.html.

And for additional info on ANTAD, the exhibits and speakers, etc., visit http://www.expoantad.net/expo2016/en/. 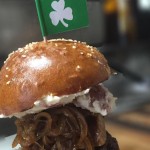 Tweeting it up for onions on St. Patrick’s Day