Two of the largest shippers in the Idaho-Eastern Oregon onion-growing region have announced plans to form a single “supershed” operation, and on July 1 Murakami Produce and Baker Packing Co., both headquartered in Ontario, OR, will go forward as Baker & Murakami Produce Co. LLLP.

Murakami Produce Managing Member Grant Kitamura, along with Baker Packing President Steve Baker and Baker CEO Jerry Baker, said on Feb. 22 that construction of a 20,000-square foot floor and shipping area has begun at the Baker Packing site, and the new structure will bring the shipping and packing area of Baker & Murakami Produce Co. to a total of 68,000 square feet. Additionally, new European-designed and manufactured equipment is going into an existing packing facility at the Baker site this summer.

Negotiations for the merger have been in the works since 2016, and Kitamura explained, “Over a year ago, the management teams of Baker and Murakami began talks about creating a state-of-the-art packing facility, a facility that could stand the test of time and allow us to be more competitive in our industry.”

Both Murakami and Baker are well-established, premium packers, with Baker moving onions on a year-round basis and Murakami, owned in part by the six-farm Murakami Growers LLC, in a longstanding marketing partnership with Potandon Produce in sales.

With the passing of decades, each operation has seen significant growth in volume and industry stature.

Its roots in growing, Murakami Produce was founded by the late Sig Murakami in 1969 as the onion packing and shipping division for Murakami Farms Inc. Kitamura joined the company in 1980.

Murakami Farms ceased operations in 1983, at which time Murakami Produce became a commercial packer and shipper for area onion growers, and in 2006 the company formed a joint venture for sales with Idaho Falls-based Potandon Produce.

Baker Packing got its start as a division of DeBruyn Produce in 1972 when longtime produce man Jerry Baker began shipping onions out of a 7,200-square foot warehouse in Ontario. His son Steve joined the DeBruyn operation in 1984, and in 1997 the two bought the company and formed Baker Packing Co.

Over the years Baker Packing and Murakami Produce have established themselves as two of the region’s most reputable and highest-volume shippers. The merger of the two sheds, according to Steve and Jerry Baker, creates a “powerhouse in the industry.”

Steve Baker said, “Jerry and I are very excited to be merging with Murakami Produce Co. Two established companies are coming together and combining our strengths into one powerful company, and the amount of experience both companies bring to this merger is invaluable.”

The term “supershed” will be used on packaging and in promotions, and Kitamura said, “It references the superior service, onion quality and increased volume that will be achieved by combining forces and expanding not only facilities but also technological capabilities.”

“I am confident that our marketing programs, grower base and many years of experience will help make the new venture a success. We look forward to have our plans come to fruition this summer, and our new high-volume grading and packaging equipment will be instrumental in growing our new business,” Kitamura said.

Feeding America and walking the walk 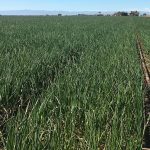 Market and Crop Update for Feb. 23