Our very first edition of OnionBusiness.com in June 2015 featured a profile of Colorado’s Bob Sakata, one of the nation’s best-known and respected members of the onion industry. In that story, Bob shared with us many memories of his long career in produce and his “recipe” for success. He also, characteristically, shared political opinions.

Now, in this politically charged election year, the 91-year-old icon steadfastly refuses to shy away from controversy, choosing instead to reflect on his 71 years in the produce industry with a mix of hope and concern.

Never one to mince words, Bob was featured at the 2012 Republican National Convention when his short video, “These Hands,” played to a cheering crowd. Speaking directly to President Barack Obama, Bob disputed the President’s assertion that business owners don’t build their own enterprises. The grower/shipper said, “President Obama’s statement that we, as a small business, didn’t make it on our own is completely nonsense. My name is Bob Sakata, and my family and my employees built this.”

Those sentiments have not changed in the last four years, and Bob speaks admiringly of his son, Robert T., known in the industry as R.T. and to his dad as Rob. Management of the company Bob founded, Brighton -based Sakata Farms, was transferred to Rob in 2010.

But Bob and his wife, Joanna, continue to be a part of daily operations at the office. Bob answers the phones, and Joanna handles administrative/accounting tasks.

“It’s amazing what he’s doing,” Bob said of Rob, who is also the president of the Colorado Onion Association and the Colorado Fruit and Vegetable Association. Like his father, the younger Sakata is an industry leader who’s recognized for his many achievements, including the American Vegetable Grower’s 2014 Grower Achievement Award he received at United Fresh’s Washington Public Policy Conference in Washington, D.C.

Bob said the entire produce industry benefits from his son’s leadership. And, without hesitation, Bob said, “It’s a changing industry.”

That’s good in many ways, but Bob also said he “was always able to survive and to advance this company because my vision was in line” with the capitalistic system of the United States.

That’s not as easily accomplished now, and he said of the country and government oversight, “I’ve been in this business for 71 years, and I’m concerned about the direction this country is going. There are too many regulations that inhibit the entrepreneur. Those regulations are costing the consumers a little more, but they are costing the farmer a big bunch of money.”

Bob has a profound belief in capitalism and competition and sees a way of life going by the wayside. “The United States became a leader in the world because of capitalism, and that’s being destroyed. I believe in free trade, but it has to be equitable,” he said.

He continued, “Competition is the greatest thing that’s every happened, not just in business but also in education.” He doesn’t buy into a trophy for participation, a ribbon for showing up.

Bob himself has worked tirelessly to achieve success. He was born in California to Japanese emigrants, and following the attack on Pearl Harbor in 1941, he and his family were relocated to an internment camp in Utah. After the war, Bob moved to Colorado and started his farm on 40 acres. It grew to well over 2,000 acres, and it included cabbage and broccoli until this year.

He has also served as president of the National Onion Association and National Sugar Beet Growers Association, and he’s been an adviser to the USDA as well as a member of the Colorado State University Extension Advisory Board.

Though he disagrees with much of what comes out of Washington, Bob remains positive, particularly about work.

“I have to hand it to Rob,” he said of his son. “He hasn’t fired me yet. And that gives me a reason to get up in the morning.” 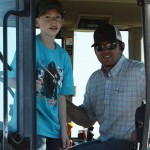 Cameron Skeen looks back at first year with Murakami Produce