In preparation for the 2016 New Mexico onion season, Carzalia Valley Produce in Columbus, NM, will be bringing in a new mechanical harvester, something James Johnson, part of the five-generation family behind the nearly 100-year-old operation, said is new to the landscape.

“We’re getting the harvester for next season,” Johnson said on Dec. 16. “This is the first time we’ve ever used one, and more than anything, it’s because our labor supply here is aging and can’t do the field work anymore.”

Another arena of preparation is for El Niño, which Johnson said to date “has kind of been a dud.” The region has received some precip, but he said, “It’s nothing like we’ve anticipated. We are prepared, though, and we’re looking forward to El Niño and the precipitation.” He said surface water supplies in the area have diminished significantly in recent years.

The historic farm was started in 1918 by W.R. Johnson Sr., who came to New Mexico’s Carzalia Valley just two years after Pancho Villa had raided and burned the nearby town of Columbus. At that time the state was only six years old.

Onions remain a mainstay on the 3,000 acres of Carzalia Valley farmland, and James Johnson said 40 percent of the crop is overwintered, 20 percent is transplanted and 40 percent is direct-seeded. Carzalia Sweets ship from June into September, and wholesale lots are brokered by L&M Cos. 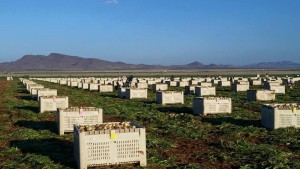