Catching up with Bob Sakata… and wishing him a Happy Birthday!!

When OnionBusiness launched in June 2015, we wanted to hit the ground running with a great personality profile. Who better, we thought, than one of the onion industry’s most respected members and one of our dearest friends in produce, Bob Sakata.

Bob started Sakata Farms in Brighton, CO, after World War II came to an end. Forty acres at first, the farm eventually expanded to an enterprise of more than 2,400 acres, with Bob raising not only onions but also sweet corn, broccoli, and cabbage. And as the farm grew and became a prominent piece of the agriculture structure of Colorado, Bob, wife Joanna, and their three children, Robert, Vicki, and Lani, became integral members of the Northern Colorado farming community.

Today, son Robert, or R.T. as he’s widely known, is sole owner of the onion growing/packing operation, but Bob told us on April 14 both Vicki and Lani – and of course Joanna, to whom he’s been wed for 64 years – have a heart-deep connection to the farm and the town. Vicki is a physician in Seattle, and Lani is involved in water purification in Colorado, he said.

“This life has been a very good journey,” he added.

Born northern California to parents who had come to the United States from Japan, Bob and his family – as well as 127,000 other Japanese Americans — were moved to internment camps following the attack on Pearl Harbor in December 1941.

The Sakatas were relocated to a facility in Utah, and Bob moved to the Brighton area of Colorado when the war ended.

Perhaps you remember the video series called “These Hands” shown at the 2012 Republican National Convention in Tampa. One of the videos profiled Bob Sakata and his farm, highlighting his love for and his devotion to farming. But Bob did more than steward the soil, as evidenced by the positive mark he’s left on boards and commissions across the country. Among the positions he held through the years were president of the National Onion Association and the National Sugar Beet Growers Association, and he advised the USDA. He was also a member of the Colorado State University Extension Advisory Board, and he served as director for an irrigation ditch company and as a member of an economic development board. He also held a seat on Colorado’s Food Safety Task Force and served as school board president.

He once called himself a “glorified consultant,” and on April 14 he said he’s “relaxed, on the side and looking in” at Sakata Farms, which now has about 400 acres in just onions.

Prior to becoming sole owner in 2017, R.T. spent seven years as farm manager. The thought was Bob would step back somewhat and spend more time doing what he loves. Turns out what he loves is what’s he’s done for more than three-quarters of a century – keep an eye on the crops and on the industry.

Yes, Bob still goes into the office every day, answering the phones and contemplating not just the farming industry but also the world. During the Coronavirus pandemic, he’s a bit more confined than he’s used to being, but Bob never complains. He said, “I have so much to be thankful for,” he said – more than once and emphatically. “I’m really blessed to have my good wife and the support of my family.”

And, when asked about plans for his birthday, he said with a laugh, “I’m going to do the same old thing. But you know what? I’m thankful I have my desk and my office.”

OnionBusiness wishes Bob Sakata a Happy and Blessed start to his 95th year! Thank you, Bob, for your countless contributions to the onion industry and for your steadfast commitment to the produce industry.

PMA, iTradeNetwork team up for free service to PMA members 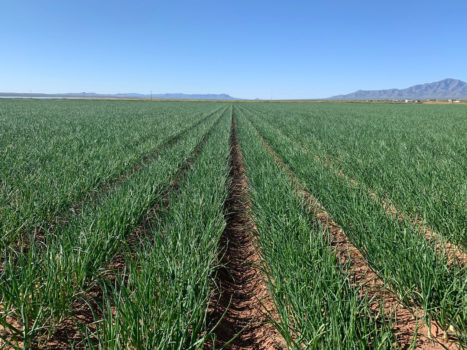