As part of the Georgia Pavilion, the Vidalia Onion Committee will share a special message in Booth 3300 with young Chef Lucas Hobbs, who has joined the Onion Committee in other events this summer and has brought a message of hope, strength and good food wherever he travels.

According to Susan Waters, executive director of the Vidalia Onion Committee, the 13-year-old Hodgkin’s Lymphoma survivor will be appearing on the center stage in the pavilion at 12:30 both Saturday and Sunday, Oct. 15-16, preparing “one of his favorite food truck recipes called Vidalia MacDaddy which is a unique and flavorful twist on macaroni and cheese.” Chef Lucas will be accompanied by his father, Matt Hobbs, who manages the Chef Lucas Food non-profit organization.

Susan told us, “Chef Lucas joined us on the road this past summer as we toured key cities with food trucks raising funds for his non-profit organization and sharing flavorful meals featuring Vidalia onions.”

In 2015 the young man was diagnosed with Hodgkin’s Lymphoma.
He is now in remission but during his hospital stay he became inspired by the movie “Chef” and The Food Network.

When the Make-A-Wish® Foundation asked Lucas for his wish, he requested a food truck to feed the doctors and nurses who cared for him and pediatric cancer patients.

Since then, Lucas has formed a non-profit organization “Chef
Lucas Food” partnering with food trucks and others in the food
community to bring food and smiles to families battling pediatric
cancer. 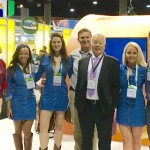