With 45 years’ worth of experience in onions, Chris Woo, sales manager for Baker & Murakami Produce Co./Potandon Produce in Ontario, OR, will be leaving the sales desk this summer.

Chris told OnionBusiness.com the date has not been finalized, but it will be before the 2018 season starts.

Known for his intuitive knowledge of the onion industry and the market, Chris is admired by friends, competitors and colleagues.

Grant Kitamura, one of the owners of Baker & Murakami Produce, has known Chris’ for 40 years and said in that the two men have been all three – starting as friends.

“I met Chris when he was working for Treasure Valley Growers and Sales (now Golden West) in Nyssa, OR,” Grant said. “It was before I was even in the deal.”

The two became friends quickly, and when Grant started his own onion career at Murakami Produce, “Chris was my competitor.”

Then Grant hired Chris in 1988, and the friend/colleague/business partner relationship has been solid throughout the years. 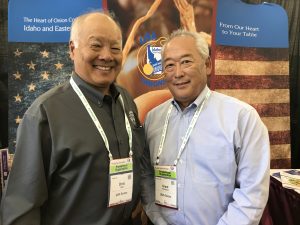 “He’s a very good friend,” Grant said, adding that their two families are also very close. “We’ve attended functions and events for each other’s kids, and we’ve vacationed together at times.”

And while Grant said Chris is “a real comedian with a good sense of humor that’s sometimes too good,” he also said, “He’s a good salesman with a lot of knowledge of the industry and its players. And he has a lot of market awareness.”

The skill set to be a good salesman started forming at the Los Angeles Wholesale Produce Market, where Chris’ father, Albert Woo, had brokered onions and potatoes. Chris was 20 when his dad died, but a close family friend, Tommy Hillcrest, acted as a mentor and taught him the business.

Like many onion men, Woo got his start at a young age in Southern California.

His onion career was launched on the Los Angeles Wholesale Produce Terminal Market.

“Forty-five or 50 years ago there weren’t many onion/potato brokers in Los Angeles,” he said. “My dad Albert was one of them.”

His father’s company was Albert Woo Co., and Woo said, “At that time he was the most dominant handler representing growers and shippers, even some from the Treasure Valley who wanted to bring their product into the Los Angeles area.”

Woo continued, “He died when I was 20. I knew very little of the business at that time.”

But, he said, he was mentored by his father’s friend Tommy Hillcrest.

Tommy had previously owned a truck brokerage, and after he sold it to C.H. Robinson, he rented an office with the produce company at the Los Angeles terminal, where he and Chris moved onions from local growers to receivers in the East.

Spending five years on the L.A. market gave Chris a good start in onions, and after he and Tommy and Michael Cutler traveled to the Treasure Valley together in the 1980s to check out the onion industry, Chris moved to the Idaho-Eastern Oregon production area and settled in Nyssa. At that time C.H. Robinson owned Treasure Valley Growers and Sales, and the fit was good.

He went back to California at the end of his first season in the Treasure Valley to marry Lonnie, and she stayed in Los Angeles while Chris returned for his second onion season in Nyssa. At the end of that season, he went to California, finished college and brought Lonnie back with him for season three in 1978.

Seven years later Sig Murakami approached Chris about working at Murakami Produce, and Chris said he thanked the legendary Murakami but turned down the offer.

Then, three years after Sig offered Chris a job, Grant Kitamura did the same.

“It was the best decision Grant ever made in his life,” Chris said. Grant said, “He’s told me that about 100 times.” Chris’s trademark humor wouldn’t let him continue the story without adding that his original contract with the onion company was written on a napkin at the A&W Root Beer stand. “I should have kept it,” he said.

Along his career path, Chris became sales manager at Murakami and then a partner in the company. Several years ago Murakami aligned with Idaho Falls-based Potandon Produce, and last year it merged with Baker Packing to become Baker & Murakami Produce Co.

Looking back at his 45 years in onions, Chris told OnionBusiness.com that he’s seen many changes, starting with the sheer volume of onions produced in the Treasure Valley and the Northwest. More acres have been planted, and more sheds have opened up to pack and ship. Technology has brought increased automation in both the field and the packing shed. Irrigation is going more to drip every year; varieties are developed for Treasure Valley conditions; onions keep longer and have better yields.

With the good, Chris has also seen the bad – weather catastrophes, and he’s weathered up and down markets, labor shortages and transportation troubles.

But he said the most important part of his career has been the relationships he’s formed, and those made his decision difficult.

But with a new grandson, Parker Christopher, Chris Woo said he’s looking forward to time with family. And with fishing. And with golfing. And possibly with other activities as well.

He’s leaving with a lot of great memories and friendships, and he’s leaving behind some good Woo-isms: Be honest so “no one can ever question your credibility and integrity.”

Know something about what you’re selling. Know about the growers and appreciate what they do; get to know your customers, and learn about the market and pricing.

If you’re lucky, you’ll leave like Chris Woo is leaving, acknowledging the help of others that have contributed to his success.

Chris said he’ll never forget those who’ve been a part of his life in the onion industry, and he said, “I cherish each working relationship.” And he’s leaving with a lot of pride, too.

“I am proud of what I’ve helped accomplish,” he said, adding that the onion industry is going in the right direction.” 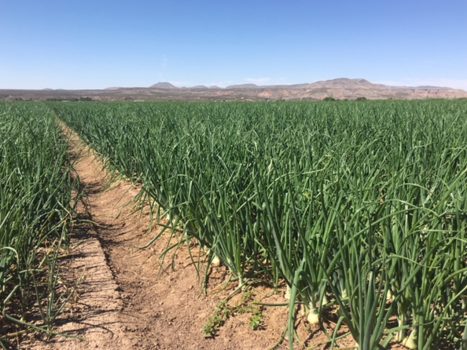