New crop onions are moving out of the Centennial State’s multiple growing areas, with Northern Colorado season having kicked off mid-August, followed by the Western Slope’s 2020 crop starting on Aug. 26 and the Lower Arkansas Valley coming up.

Ahlberg Family Farms in the Western Slope community of Delta started shipping Aug. 26, with Southwest Onion Growers of McAllen, TX, serving as exclusive sales agent for both Ahlberg and Brent Hines Farms.  The two growers pack and ship from the same facility and use the same H-2A crew, with Ahlberg starting the season and shipping intermediates through the month of September. Hines will come in as Ahlberg finishes and will pack and ship all three colors in storage onions through mid-January.

In nearby Olathe, grower John Harold will start his 2020 season right after Labor Day.

David DeBerry with Southwest Onion Growers was on the Western Slope earlier this week and said growing conditions were good, and harvest weather has also been favorable.

“The nights are cool, and the daytimes temp are starting to moderate,” he said on Aug. 25. The highs are supposed to be in the 80s this coming week.”

David continued, noting the good quality for 2020. “I would call this the most complete crop in the 10 years I’ve been doing this deal,” he said. “The onions have a desirable size profile, with a few more mediums and a few less colossals this year. We have three generations of Ahlbergs involved in the operation now, and they’ve been harvesting for about a week. Now we’re shipping all sizes and colors, with good crop health, right from the start.”

For grower John Harold, Don Ed Holmes and The Onion House in Weslaco,

TX, handles sales. Don Ed said his longtime grower’s crop is also looking good. And coinciding with the start-up of John Harold’s onions will be white onions from Don Ed’s Utah growers in Corinne. Those early onions will be followed by the storage crop, which will start shipping in early October.

Enthusiastic about the season’s start, David said, “The market right now is decent, not super high but steady. And there’s also decent demand. So far our pre-bookings have been aggressive.”

Transportation, he said, is available, and he added, “We’re just glad to get going.” 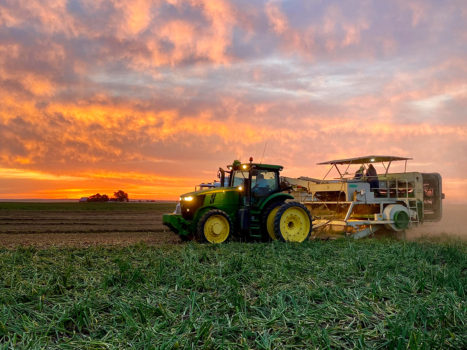