In his recent report on this year’s onion seed trials in Northern Colorado, Dr. Thaddeus Gourd, Extension Director and Agent (Agriculture) with Colorado State University, said 2017 was a “great year to grow onions.”

Eight companies participated in the trials, which were hosted by Bob Sakata and R.T. Sakata of Sakata Farms at a site located north of Fort Lupton. Dr. Gourd said onions were planted on March 13, and the trial site used flood irrigation.

“It is our hope that this research provides onion producers in Colorado with information to make educated decisions on variety selection based on environmental and pest conditions experienced here in Northern Colorado,” Dr. Gourd said. “In general, weather conditions were favorable for growing onions. We did have a cool wet spring and moderate temperatures in July and August. Little to no rain was recorded for the entire month of August, which is usually our monsoon season.”

Onion emergence evaluations occurred on May 24. Dr. Gourd said thrips populations were counted on June 15 and “averaged only 5.5 thrips per onion plant.” He said, “The Iris Yellow Spot Virus (IYSV) assessments were not taken because of very low disease incidence. The pink root severity and fusarium basal rot assessments were performed on Aug. 15.”

He continued in his report, “This pink root disease pressure averaged 41.9 percent of roots infected and had a significant impact on onion yield. The percent of fusarium infected planted averaged 2.1 percent. Some varieties appeared to exhibit tolerance the pink root pathogen. Maturity data was taken on Aug.t 2 and Aug.t 15, 2017.” Tables showing complete results are available from the Extension Service.

This year’s Northern Colorado Onion Variety Trials Field Tour with breakfast was held on Friday, Aug. 31 and was again sponsored by Jose Solorzano of American Takii.

Onion harvest occurred just on Aug. 28, a few days before the tour, and processing took place on Aug. 29.

All colors and varieties combined averaged 20.1 tons per acre, 44.8 percent jumbos and 45.8 percent mediums, with colossals averaging less than 1 percent. Pre-pack averaged 6.4 percent. Again, a table of complete results is available from the Extension Service.

During the second week of January 2018 onion storage assessments will take place.

Your contacts at the Extension Service are Cassey Anderson at 303-637-8103 or cmanderson@adcogov.org or Thaddeus Gourd with comments or questions at 303-637-8117. The website can be accessed at www.adamscountyextension.org for 2017 onion variety trial results. 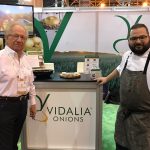