By Katelyn Bauman
(Editor’s note: The following story came to OnionBusiness.com from Connell High School senior Katelyn Bauman, granddaughter of OB frequent contributor and head of L&L Ag Production in Connell, Larry Bauman. Katelyn is daughter of Kerrick Bauman. Our thanks to the Bauman family, Connell High School and its teachers and to the terrific companies that hosted the FFA tour.) Featured image: members of Ag. tour including article author, Katelyn Bauman (third from the right) and father, Kerrick (far right).

Eleven FFA members gathered that morning, eager to learn about potatoes, onions and mint. Preceding the tour, they were given T-shirts that said, “CONNELL FFA AG INDUSTRY TOUR 2019.”

The first tour was at Harvest Fresh in Othello, WA. The group met with Bill Shibley and Ted Shirkey, who walked them through their potato line that was packing fresh-pack potatoes. Ted stated, “If everything works right, potatoes can be delivered out of a field and into a grocery store within 24 hours.”

FFA members saw how the potatoes made their way out of a semi-truck, through a washer, and then hand sorted and mechanically sized and grouped before being dropped into plastic “Green Giant” bags and delivered to a grocery store. Bill described how each grocery store likes to have their potatoes in different bags or boxes, which requires lots of organization on Harvest Fresh’s side.

At 11:30 a.m. the FFA members met with Kerrick Bauman, owner of Target Ag. Target Ag processes onions for onion rings to be delivered to restaurants throughout the nation. He gave us an enjoyable tour of the onion processing line and storage.

Many tears were shed as members walked through a yellow onion storage. Like potatoes, onions were hand sorted as well as mechanically sized and grouped. Kerrick showed off the European packing line that mechanically packages onions, only needing three people to operate.

The group received complimentary Target Ag hats as a souvenir.

Lastly, the group traveled to Aromatics Inc. in Basin City, WA. Aromatics processes peppermint and spearmint to be sold as tea. This tour was led by Travis Boyd and Paul Flatau as well as other managers. The quality control team had brewed samples of Spearmint and Peppermint for us to taste test. Most people like Peppermint more than Spearmint.

In Aromatics’ mint warehouse, the aroma of mint was so overcoming that skin felt irritated and sinuses were cleared. The FFA members learned how mint was sorted, cleaned, pasteurized and packaged.

As this was my senior project, I am very grateful for the willingness of the three companies to give tours. It was exciting to see the variety of careers in agribusiness while being educated with fellow FFA members. 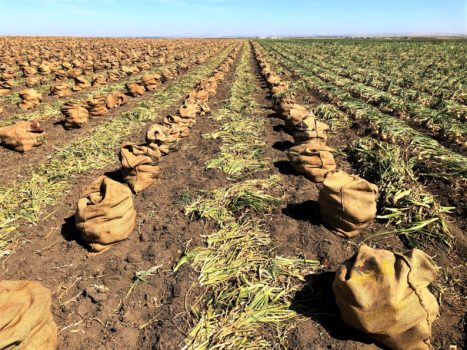