Crookham Co. based in Wilder, ID, proudly announced the 10-year anniversary of its Intermediate day onion, Scout, recently, and OnionBusiness asked breeder Dave Whitwood what made this variety a standout for him.

Dave said Scout, which is especially well-suited for Western and Northwestern growing areas but which has also found favor with Northeastern onion growers, is versatile and works great for both retail and foodservice uses.

With a size that trends jumbo-to-super colossal, Scout is a good Intermediate variety for New Mexico, Idaho-Oregon, Nevada, California, Utah and Colorado.

“It checked all the boxes of being a grower-friendly onion with good vigor and nice erect foliage, but it also had a unique timeslot,” he said. “Scout can start or end a grower’s onion program, so it’s adaptability is a real plus for growers.”

It has built a reputation as a “kick-starter to the Long Day season as it’s well adapted to hot, stressful conditions, and it has the ability to mechanical harvest for maximum efficiency.” And, according to a Crookham release, “In the Southern latitudes these same robust characteristics makes Scout a good finisher.”

Crookham Sales Development Manager Lyndon Johnson said Scout has shown “really good yields,” and he said the mechanical harvest aspect is another real plus. “It’s a very good onion to start the transition into storage onions,” he said.

The Crookham release said, “For 10 years Scout has established itself as a unique and dependable kick-starter and finisher, and Crookham would like to offer a ‘buy 10 units, get one unit free ‘offer for the 2021 season to celebrate this variety.” For more information, contact 208-459-7451 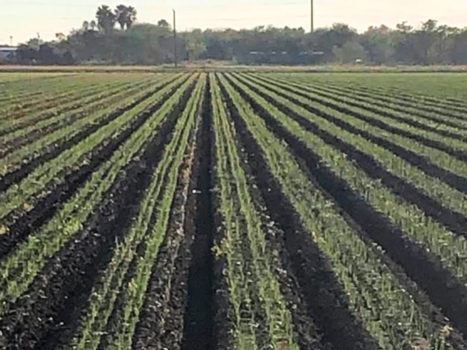