The annual Crookham Co. Seed Show on Aug. 26 in Wilder, ID, provided a great setting for the company’s seed dealer partners and local growers to catch up, according to Kris Crookham.

Several varieties from seed producers such as Seedway, Gowan Seed and Logan Zenner were showcased, with the long-day Caliber and Caldwell showcased.

Kris told us, “The trial was in great shape, and the 2020 growing season has been favorable for onions in the Treasure Valley. It was a fun day to connect with our dealer partners and the local growers to exchange information.”

She went on to say, “The entries consisted of the entire long-day onion
lineup of reds, whites and yellows from Crookham along with two mainstay yellow intermediate onions, the Avalon, and Scout.”

And, Kris added, “Grower optimism is high for the upcoming season as the onions are finishing up and maturing into a high-quality good storage product.”

Plant date for the trail was March 17 of this year, and the August event was Crookham’s fifth year of annual trials. Much has been gained through the trails, and Kris said, “The main long-day yellow segment of Trident, Caldwell and Caliber continue to experience tremendous growth among growers in the Western U.S.”

She explained, “Caldwell has a distinct advantage over the competitors as its ring separation is superior to all other genetics in the processing segment. Caliber and Trident excel with single centers and long-term storage, and the fact that all these yellow varieties are multiple use whether going to process or retail makes this lineup very versatile.”

In addition to the yellows, Kris said, “The white onions were also a focal point with the lineup having an early long-day with White Cloud, along with a main season White Cap and a later maturing Brundage.” She noted, “All have excellent uniformity with bright white color and can fill an entire program for the whole season.”

And, she concluded, “We were proud to have our dealer partners in attendance and thank them for their continued commitment to Crookham Co.”

Many thanks to Kris Crookham for sending these great photos from the event. 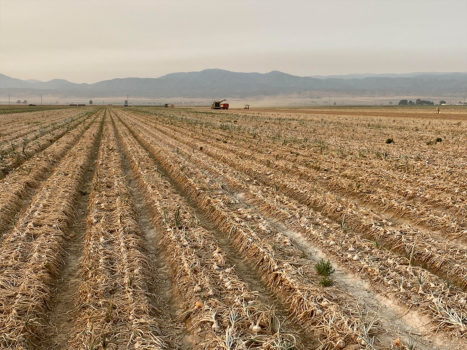