Kent Sutherland, sales manager at J.C. Watson Packing Co. in Parma, ID, said this week there is a better pull on demand, and the market remains steady. Overall volume is good, and Kent said there is plenty of demand for mediums. He told OnionBusiness.com it continues to be a strong market for reds, with anticipation that the market will continue to increase — particularly since there are reports that Canadian onions and onions out of New York are going to be finishing soon. It’s also anticipated that onion volume out of IEO will increase because some sources say Dalena Farms in Kettleman City, CA, will be finishing up soon.

Bill Trask, secretary/controller at Baker Packing Co. in Ontario, OR, reported that Baker is working to fulfill contracts this week, but the company is also seeing some new customer inquiries at the same time. Baker is hesitant to ship many loads via rail due to the performance timing issues on delivery. In addition, Baker Packing is watching to see how truck transportation holds up as Christmas trees are being shipped, something that always tightens truck transportation during the holiday season.

Don Ed Holmes, president of Onion House in Weslaco, TX, said Onion House is “rocking along in Colorado and Utah” with good crops this year. “But we haven’t felt the Thanksgiving rush,” he said. “We had a great October, but November has been slow so far, a little lackluster” in demand and movement.

Don Ed Holmes said onion planting continued in the Rio Grande Valley, although Nov. 15 is the normal cut-off. That area’s onion deal could be off by one-third, he said.

Looking at the market, Don Ed said shipments have not been high, but he followed up by saying that the overall market is better than a year ago. “But it’s hard to get into Atlanta due to Canadian mediums, and it’s hard to get into the Northeast because of Canadian jumbos,” he said. Washington has had good exports, and there have been some exports out of IEO. “So the market this year looks like it will get better down the road.”

He also reported on the Mexico crop, which is now in. “It’s very similar to last year,” he said. 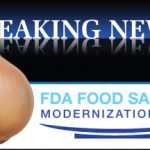