California:
Doug Stanley, general manager of Harris Fresh in Huron, CA, and incoming President of the National Onion Association, told OnionBusiness.com the Brawley/Imperial Valley crop is all planted, and though “right now the weather is a bit warmer than we like it,” the stands all look “really nice.” Doug said the San Joaquin Valley crop is one-third planted, and he added, “We have the same issues that we had last year – not enough water and not enough labor.”

Cindy Elrod with Peri and Sons in Yerington, NV, reported that company’s Imperial Valley crop is being planted now. “Planting in the Imperial Valley is active,” Cindy said on Nov. 30. “Acreage is about the same as last season, and we should finish planting around the third week of December.”

Texas Rio Grande Valley:
Don Ed Holmes of The Onion House in Weslaco said the Rio Grande Valley onion crop is “beautiful” at this point. Weather has been idea for growing, and he said though growers didn’t plant early, the crop could come in a bit sooner than normal, maybe in late March or early April.

Georgia:
Cliff Riner, who’s with the University of Georgia’s Department of Horticulture and Vidalia-area extension service said that overall planting of onions is going “very well” right now. Cliff said the region has been very dry, which has prompted growers to remain vigilant in irrigating, and he reported planting is between 65 and 70 percent complete. “We haven’t seen any slowdown in planting caused by the dryness,” he said.

Mexico:
The Tampico onion crop has been growing in ideal conditions, according to Don Ed Holmes of The Onion House in Weslaco, TX. First loads of this crop, heavy to whites, will likely ship the last week of January, he said. 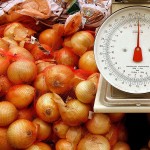