California:
Cindy Elrod at Peri and Sons in Yerington, NV, told us, “We are finished planting in the Imperial Valley. Acreage is about the same as last season with a few additional acres planted organic. The first wave of planting is complete for our San Joaquin crop, and we’ll plant again the end of December through early January. We should finish planting the last of our Firebaugh crop in late February or early March. Acreage is will be slightly higher in San Joaquin this season due to field rotation.”

Arizona:
Paul Reeping at G Farms in El Mirage and Stanfield reported that the company finished planting at the end of November. “All scenarios regarding the weather have been great for planting,” Paul said. G Farms did not plant any red or white onions this year. Paul said there are no anticipated issues with water this season, and the target date for harvest is May 1.

Vidalia:
Danny Ray of Ray Farms in Glenville , GA, reported that his operation finished planting a week ago. He said Ray Farms’ acreage is down a bit because they calculated what they could harvest with their harvester and made the decision to reduce acres somewhat. “Thank the Lord that all of our transplants turned out in good shape,” Danny said. “We have been hearing that other growers were not as fortunate after the hurricane and are short on transplants for planting.” He noted that the area received approximately five inches of rain over the last several days, which will help to establish the root systems. 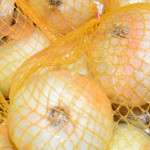