Bob Meek at Utah Onions in Syracuse told OnionBusiness.com that the 2016 crop is in the field, and thus far weather has been mostly good. “There were a few storms, but there’s been no significant damage,” Bob said. Utah Onions will start its harvest in September with yellows, and other varieties will follow soon after.

Utah Onions works the earlier Washington onion deal out of Prosser, and Bob Meek told us that the crop could be coming on a bit faster than is optimal. “We’re hoping it slows down a little,” he said, noting that a crop that comes too early would be harvested during summer heat. The Washington crop consists of yellows, whites, reds, sweets and organics, he said.

L&M Cos. Rocky Ford facility has approximately 500 acres, with most in the Rocky Ford area and some east of Pueblo this year. Don Mameda told OnionBusiness.com all colors are being grown for both retail and foodservice, and he said transplants will lead off the harvest in mid-July. Onions will ship from Rocky Ford through mid-January, he said.

Don Mameda at L&M Cos. in Rocky Ford, CO, is also managing the company’s Kansas crop this year. He said all acreage in both Kansas and neighboring Colorado was planted from late March into April, and Kansas harvest will start in early August. Some of the Spanish-type onions will ship immediately, and onions will also be put into storage and will ship through January. All colors are growing in both states, he said. 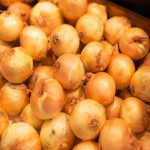