Crop News for May 19

Robert Bell of Western Onions said on May 16 that his operation has “started mowing the tops of our fresh market onions in Bakersfield today, and we will start harvest tomorrow, then run the onions into bins and put them on the drying wall for three or four days then pack.” He said he had received a report of a shortage of field workers for hand clipping some early colored onions in Bakersfield, but he said he believed that was due to the fact most of the crews are in the Imperial Valley at this time and there is limited acreage ready in Kern County.

Grant Kitamura at Murakami Produce in Ontario, OR, said the Treasure Valley has been experiencing favorable conditions for the 2016 crop of Spanish Sweets. “We’re having good weather this week,” he said on May 17. “The crop looks good, and we have water in every district. Now Mother Nature is in charge.” Traditionally harvest kicks starts in early August.

Bob Sakata at Sakata Farms in Brighton said on May 16 the farm’s onions, which were planted in March, saw some light hail and freeze recently, but neither weather event should impact the crop. “We should have very good stands,” the onion veteran told OnionBusiness.com. “Now all we need is some warm weather,” he added. The farm starts its onion harvest after Labor day and ships through March, with sales handled by Hugh Branch Inc.

David DeBerry of Southwest Onion Growers in McAllen, TX, works with several onion growers on Colorado’s Western Slope, including Coal Creek in the Montrose region, Hines Farms in Delta and Ahlberg Farms in Delta. Planting is going on, and the onions will ship starting in September.

Michelle Gurda of A. Gurda Produce in Pine Island said the 2016 onion crop is planted, and the onions are starting to come up. All colors and varieties are in, and the weather has been cooperating so far, Michelle said. First loads traditionally ship in early August. 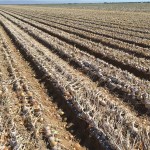 Market Update for May 19