Attendance hit 325 at the June 20-21 Center for Produce Safety Symposium held at the Denver Hyatt Regency, according to a report from the Colorado Fruit & Vegetable Growers Association. Several members of CFVGA took part in presentations, and attendees from across the nation came to Denver for the event.

The water issue is of particular importance and is heightened by the recent proposed rule by the Environmental Protection Agency and U.S. Army Corps of Engineers to rescind the definition of Waters of the U.S., or WOTUS, as set forth under the Clean Water Act of the Obama Administration in 2015. The EPA announcement came after the CPS gathering in Denver, but water was discussed in depth at the meeting.

The matter of water safety was paramount at the Denver Symposium, and during a panel discussion, participants were asked, “What is a truly representative ag water sample?” the CFVGA report said.

The report said that current method 1603 was described as “onerous for growers to comply with because most laboratories don’t use that method and because there is an nine-hour window during which the sample must be tested.”

Sakata is quoted in the report as saying, “… there are still a lot of questions whether generic E. coli is the best indicator for food borne pathogens in irrigation water. Overall, it was stressed that food safety has to be a ‘culture,’ something practiced each and every day to be effective no matter the size of the operation.”

One upshot of the water issues and differing opinions and interpretations is that the FSMA deadline for water compliance has been extended indefinitely. “CFVGA joins other agricultural organizations in applauding the FDA’s decision to extend this deadline,” the story said.

In addition to Robert Sakata, who with his father, Bob, oversees Sakata Farms in Brighton north of Denver, the Symposium also heard from Michael Hirakata of Hirakata Farms in the Arkansas Valley town of Rocky Ford, as well as CFVGA board member Dr. Michael Bartolo of Colorado State University’s Arkansas Valley Research Center in Rocky Ford. The men sat on a panel that provided other Symposium attendees with a Colorado perspective on produce farming in the state.

The CFVGA report said the men were chosen because of “their first-hand experience with the 2011 Listeria contamination of cantaloupe in Colorado.” The discussion included a look at the importance of food safety and the preparation it takes to respond.

As reported by CFVGA, Sakata told the audience, “We lobbied hard to bring CPS to Colorado to learn what research is ongoing and planned as well as to develop relations with the experts who can come help all of us in Colorado.” He cited unique conditions in the state, including the possibility that altitude might impact food safety practices as the result of higher levels of UV waves penetrating the atmosphere. 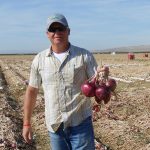