Walla Walla Sweets are on the move from father/son team of Fernando Enriquez Sr. and Fernando Enriquez Jr. and their operation, Enriquez Farms in Walla Walla. Fernando Jr. told OnionBusiness harvest started in mid-June, and he added, “We should be done in early August.”

Longtime Walla Walla growers with a rich history, Enriquez Farms was started 40 years ago when the elder Fernando and his wife, Lourdes, moved to the Walla Walla Valley from Mexico City, Mexico.

Fernando Jr. told us that Lourdes had graduated with an accounting degree from the National Autonomous University of Mexico, and his father is a second-generation farmer whose father was a Spanish immigrant who moved to the Mexican city of Oaxaca and grew sugar cane.

The younger Fernando said he grew up helping his father farm onions, and he noted he “always held the same passion for agriculture.” After he graduated with a finance degree from Eastern Washington University, Fernando Jr. worked in the banking industry for 12 years.

But he said he felt his calling was drawing him back to the farm, and he decided to “trade [my] tie in for boots, becoming the third generation of farmers in our family.

He said that because he knows how important an education is, he enrolled in an agronomy program at a local college before officially returning to the farm.

Jr. said he finished the agronomy program at the top of his class and also placed 1st in a state soils competition.

Now in his sixth crop season, Jr. said his passion and determination has been passed on from his dad, and he plans “continue to grow my family’s farming legacy with pride.”

His mother, Lourdes Enriquez, manages all of the labor for the farm, and sibling Sandra Enriquez-Erwin lives in Southern California with her husband and six-month-old daughter, Lillian.

“She helps with administrative tasks remotely,” Jr. said. Another sibling, Michelle Enriquez-Chapar, lives in Seattle with her husband and works as a teacher. She spends her summers in Walla Walla on the farm helping with harvest.

In Walla Walla, Jr.’s fiancé’, Sarrah, helps with marketing and other administrative work. The couple has four children: Whitney, 21, Austin, 17, Reese, 14, and Eva, 12.

Fernando said this year Enriquez Farms has 140 acres of onions as well as 100 acres of wheat and corn.

“We grow Walla Walla Sweet Onions, red and white onions,” he said, noting the operation has a current GAP Certification.

The pack options are 5-, 10-, 25- and 50-pound sacks and cartons, and packing is outsourced to Tri-Fresh. “They use optical sorters and sizers, and the storage is temperature controlled,” Jr. said.

On the farm, the veteran growers use both drip and overhead irrigation. Tractors are GPS equipped, and all planting is by hand labor.

“We do both fall seed planting and transplant spring planting,” he said. “We plant about 70 acres of fall seed Walla Walla Sweets.”

Like everyone in the Northwest, Enriquez Farms “experienced a very long cold winter with extended snowfall,” Fernando Jr. said. “We were able to get into our fields in late March.” But harvest kicked off within the normal window for mid-June, he said.

Labor this year “has been great and we have a solid crew,” Jr. said, adding, “Transportation is also great.”

And with a smooth-flowing operation well established, Fernando Jr. said there are major changes are in store for the foreseeable future. He commented, “We keep it pretty simple and have a system that works perfect for us. No changes on the horizon for now.” 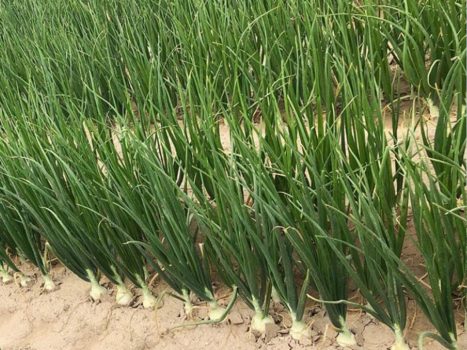