From the island of Maui, OnionBusiness.com says, “Aloha oukou!” which roughly translates to, “Hello, all y’all!” in Hawaiian.

It’s the week of the National Onion Association winter convention, and many of our contributors are enjoying sun, food and engaging sessions at the Grand Wailea Waldorf Astoria Resort. Others are stateside, holding down the fort. One thing we’re all doing is promoting onions and watching market and crop conditions across the nation and around the world.

One activity set for conventioneers is the Kula Ag Tour and Luncheon, taking in a commercial grower’s onion field as well as the Maui Experiment Station Sweet Onion Variety Trial, and OB Publisher Sherise Jones will be reporting first-hand on the tour.

We found some good info on Maui sweet onions, also called Kula onions, at https://get2hawaii.com/tag/maui-onions/. The site said that Maui onions “are a Yellow Granex type hybrid. Farmers developed them from Texas varieties,” and they are grown “in the Kula region on the eastern slopes of Haleakala, Maui’s legendary volcano.”

They are not grown in huge quantities, with farmers limiting “growing to no more than 400 acres of prime agricultural land each year. This makes the relatively limited supply of these onions even more special. One can typically get them during the months of February through November.” And one can identify the Hawaiian onions through the trademark “Kula Grown.”

While we were researching the Maui onions, a recent news story about agriculture in Hawaii came to our attention, and we find it interesting how certain farming/ag problems and situations are shared, regardless of setting. Even paradise has its issues.

The story, “Department of Agriculture receives less than 1 percent of state budget,” was written by reporter Chris Sugidono and published Oct. 21, 2018, at http://www.mauinews.com/news/local-news/2018/10/decoite-hawaii-farming-suffers-from-lack-of-state-support/.

The story covers the Hui Holomua Business Fest held at King Kamehameha Golf Course in Waikapu and quotes State Rep. Lynn DeCoite. DeCoite, who is the state’s only farmer/lawmaker, was “questioning Gov. David Ige’s pledge to double local food production by 2020.” The story said, “… DeCoite believes legislators should be shifting more taxpayer dollars from tourism into agriculture, which makes up less than 1 percent of the state’s total budget.”

Representing East Maui, Molokai and Lanai, DeCoite, served as a moderator for a panel of farmers from several islands of Hawaii.

She is quoted as saying, “Tourism money should be used for agriculture and not strictly tourism.” Following the panel, DeCoite was quoted: “When people come to Hawaii, they like eat what’s in Hawaii. They no like eat the apples imported here or the almonds. They want to eat local taro, ulu, sweet potato, the fish. We cannot showcase tourism if we cannot showcase what’s grown here.”

Her family owns and operates L&R Farms on Molokai with her family, the largest sweet potato farm in the state. And, the story related, the legislator noted that “support for farming has decreased over the years with budget cuts to the state Department of Agriculture.”

Sugidono reported that Hawaii has “about 7,000 farm operations covering a little over a million acres, according to the USDA’s Hawaii Field Office 2017 state agriculture overview. Those farms account for only about 10 percent of food consumed in the state, while the other 90 percent is imported.”

The story said that while “a little more than $50 million is set aside for the state Agriculture Department — or 0.4 percent of the state’s total fiscal year 2019 budget,” “….state lawmakers allocated $79 million to the Hawai’i Tourism Authority, despite a scathing audit in February that revealed ‘extravagant’ spending such as $50,000 on first-class airfares, hotel rooms that cost more than $400-per-night and a one-day chauffeur service for $369.”

In addition to increased funding from the Department of Ag, DeCoite was quoted as saying “the Department of Hawaiian Home Lands, Kamehameha Schools and the Office of Hawaiian Affairs need to provide further support. She said DHHL is ‘land rich, cash poor,’ and could be the driver for future agriculture along with funds from OHA and Kamehameha Schools that could ‘infuse farming cooperatives.’”

With our interest piqued by the story out of Maui, we went on to check USDA food stats site at https://www.ers.usda.gov/data-products/ag-and-food-statistics-charting-the-essentials/ag-and-food-sectors-and-the-economy.aspx and found that “Agriculture, food, and related industries contributed $992 billion to U.S. gross domestic product (GDP) in 2015, a 5.5-percent share. The output of America’s farms contributed $136.7 billion of this sum—about 1 percent of GDP.”

We also read that “In 2017, 21.6 million full- and part-time jobs were related to the agricultural and food sectors—11.0 percent of total U.S. employment. Direct on-farm employment accounted for about 2.6 million of these jobs, or 1.3 percent of U.S. employment. Employment in agriculture- and food-related industries supported another 19.0 million jobs. Of this, food service, eating and drinking places accounted for the largest share—12.5 million jobs—and food/beverage stores supported 3.2 million jobs. The remaining agriculture-related industries together added another 3.3 million jobs.”

And when we clicked on https://www.ers.usda.gov/data-products/ag-and-food-statistics-charting-the-essentials/agricultural-trade/, we read, “Over 44 percent of U.S. agricultural imports are horticultural products: fruits, vegetables, tree nuts, wine, essential oils, nursery stock, cut flowers, and hops. Sugar and tropical products such as coffee, cocoa, and rubber comprised just over 20 percent of agricultural imports in 2015. Imports of vegetable oils, processed grain products, red meat, and dairy products have grown significantly in recent years.”

The stats can be overwhelming but also very telling, and we’d be interested in how the changing face of U.S. and world ag affects each of you, our OB readers and contributors. Feel free to comment. 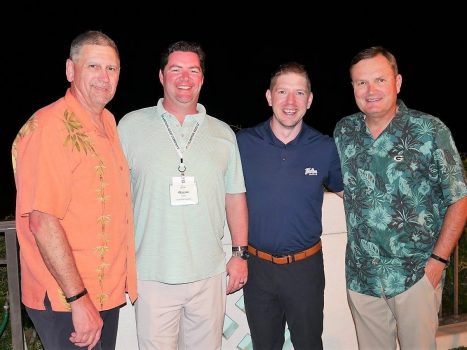 Volm Companies connects with customers and families in Maui