In Treasure Valley, COI offers comprehensive testing
In Bend, meeting with FDA’s Gottlieb a positive one

Food safety is center-of-plate in produce today, and as the Idaho-Eastern Oregon onion season ramps up, the issue is getting even more attention. 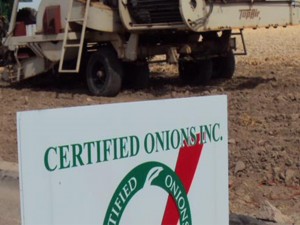 COI, since its founding in 2009, has provided pesticide residue detection for Northwest onions, expanding the program in the interim to include testing for pathogens such as E. coli and Salmonella and adding to companies’ food safety programs.

And as food safety continues to ratchet up with recalls and advisories, the sit-down with the FDA commissioner on Aug. 7 gave some assurance the feds are aware of issues and concerns for multiple Northwest commodities, including onions from COI’s home territory of the Idaho-Eastern Oregon Treasure Valley.

Kay gave credit to Oregon Rep. Greg Walden, who he said was instrumental in setting up the gathering. In reporting on the meeting the next day, Kay said it had been very cordial, and Commissioner Gottlieb was receptive to the concerns expressed by IEO representatives as well as reps from other areas in Oregon.

“We talked about irrigation,” Kay said, adding that the FDA has in the past been responsive to IEO and COI research. The government agency in fact modified its initial water testing rule that called for samples to be taken weekly, lengthening time between samples. Currently, Kay said, there is no water testing rule in place and the industry awaits a decision by the FDA.

“We also expressed concerns that the United States is an importer of onions rather than an exporter,” he said, noting the need for “the playing field to be leveled” when it comes to onions imported from Mexico, Canada and Peru.

Kay had delivered a letter to Commissioner Gottlieb from the Idaho-Oregon Fruit & Vegetable Association, and in it were specific concerns. It was signed by Association President Joe Farmer of Fort Boise Produce in Parma, ID.

In part it read, “The shippers and growers in Idaho and Eastern Oregon are spending a lot of time, effort and money to comply with FSMA and third-party certification. These shippers are in serious doubt that he FDA will have the ability to ensure that exact and similar safety measures are in place on international farms and packing sheds through its administration of the Foreign Supplier Verification Program. One area of concern is that FDA is relying on the Importer of Record to supply documentation that the requirements for the program are being met. In many cases there is no substance to the Importer of Record. They are just a broker with an office somewhere and they are often transitory.”

It continued, “With imports of onions continuing to increase and the effect that is having on the Idaho and Eastern Oregon onion region, it is vital to make sure the Foreign Supplier Verification Program equally enforces stringent safety standards of production and handling on all incoming internationally sources onions. U.S. producers are compelled to comply; all foreign production must beheld to the same standards.”

Paul Skeen of Skeen Farms in Nyssa, OR, who serves as president of the Malheur Onion Growers Association, was also one of the group that traveled to Bend to share onion industry concerns to the FDA.

“I think he really understood where we are coming from,” Paul said. “We know that FSMA is still a work in progress, but with all the money we have spent on unnecessary water testing, it seems that FDA should be in a position to help us communicate how safe our product is to end-users. Though we didn’t get a firm comment, at least he understands our point of view. In addition to FSMA, we voiced our concern to Commissioner Gottlieb about imports. When it comes to imports, domestic producers are only asking for a level playing field. Simply checking imports at the border won’t work.”

Paul continued, “By the time U.S. producers pay for GAP, FSMA and other regulations, it’s tough to compete. When it comes to import problems, Gottlieb is a Trump appointee, and if we are going to get anything done, now is the time to do it.” 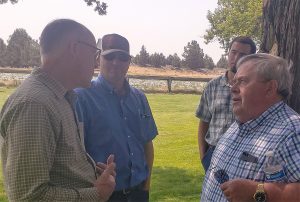 Paul also commented, “If it weren’t for Oregon Congressmen Greg Walden, we wouldn’t have had the chance to share our concerns with FDA, and for that, we are very grateful. At the end of the meeting, everyone agreed to keep the dialogue going, and that’s exactly what we will do.”

While not every question was answered, “All in all it was a very positive experience,” Kay said of the Bend event. “We also discussed labor, and it was a privilege to sit down with him.”

And about the scope of COI services, Kay said it continues to enlarge, with growers now taking advantage of the protocol. This year COI has nearly two dozen members, he said.

“We have a new member who’s a grower,” Riley said, adding, “Heretofore our membership was primarily made up of shippers. We’re certainly open to growers, and we do have a shallot grower/shipper member now as well.”

“There’s a larger focus all the time on pathogens, particularly Salmonella and E. coli 157,” he said.

And for its members, non-profit COI follows stringent protocol to identify off-label pesticide use and maximum residue levels. The third-party audit is performed at both the field and shed levels. The corporation has also funded water quality research through the OSU Experiment Station.

“To be a fully active COI member the company has to test everything for pesticide residue,” Riley said. “Pathogen testing is voluntary. It is a very good thing to have for any food safety program.”

Storage onions have not been linked to any outbreaks/recalls, Kay said, and he added, “We could provide this testing procedure for any number of crops, and we’ve had discussions with growers in the Northwest.”

Skeen Farms in Nyssa, OR, Harvest Video of the Week 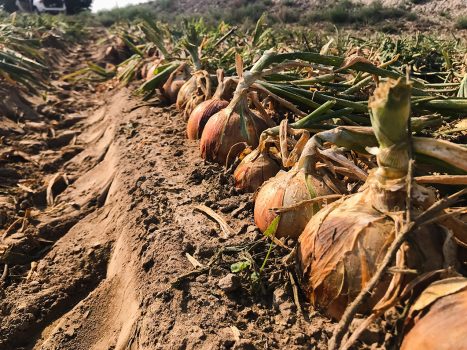