From our friend Stuart Reitz in the Department of Crop and Soil Science at the Malheur County Extension office, Ontario, OR, comes an update on the FDA’s testing for agricultural water.

Stuart said in a news brief on April 11 that the FDA is reconsidering the water standards, “exploring ways to simplify the microbial quality and testing requirements for agricultural water established by the Food Safety Modernization Act’s (FSMA’s) produce safety rule while still protecting public health.”

Stuart also said that feedback from the produce industry “indicates that some of these standards may be too complex to understand, translate, and implement. Much of the feedback has come from the IEO onion industry and research supported by it.” He said in response to the concerns from the Treasure Valley, the FDA is “considering how it might simplify the water standards,” and the agency “intends to work with stakeholders as these efforts related to the water standards proceed.”

He said, “I wish I knew what changes FDA may adopt, but it is still early in the process.” He, and OnionBusiness.com, will update the industry on changes, but as Stuart pointed out that in the meantime, “It would be wise to keep planning on January 2018 as the first main compliance date for the water testing. According to the current rules, the 2018 season is when most onion farms would need to start their water testing program.”

Photo of the Week April 13 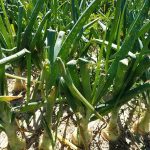