Our friend Cliff Riner with G&R Farms in Glennville, GA. Cliff let us know that G&R, Georgia’s oldest Vidalia grower, is playing a large role in the continuation of farming in the United States through scholarships from Growing America’s Farmers/National Future Farmers of America.

Some funding for the scholarship program is being secured through an initiative introduced by G&R and involves Vidalia onions sold by retailers in more than two dozen states, as explained in a release sent by Cliff.

“Participating retailers in 30 states are contributing a percentage of sales from this year’s crop of Vidalia Onions to support Growing America’s Farmers (GAF), a non-profit foundation that provides college scholarships through the National Future Farmers of America Organization,” the release said.

While total proceeds are not yet complete, GAF Founder Walt Dasher, a third-generation farmer and partner in G&R Farms, said scholarship recipients had been announced: “by a wide range of FFA state chapters where many of the participating retailers are located.”

He said, “We’re both excited and appreciative of the wonderful support we have received from retail partners from around the country. This is a combined effort made possible by the commitment of many national retailers to help us award scholarships to deserving students who are pursuing careers in production agriculture.”

This marks GAF’s first full year of operation, and Walt said the response “ had exceeded our expectations.” He added, “We will continue to work diligently with our retail partners and the National FFA Organization to increase awareness about the steady decline of young people who are interested in production ag career opportunities.”

According to data provided in the release, “The current average age of a U.S. farmer is 58 years old and rising. By comparison, the average age of a farmer was only 50 in 1987.” Walt Dasher has said GAF’s primary goal “is to encourage and recruit young adults to become tomorrow’s leaders in the field of production agriculture.”

Last year G&R Farms entered an agreement with the National FFA Organization to provide college scholarships from a percentage of its own Vidalia onion sales, establishing GAF and “a multi-tier effort to involve retailers who support educational opportunities for young people aspiring to become America’s future farmers.”

OnionBusiness.com applauds this initiative, and we encourage our readers to reach out for additional info about Growing America’s Farmers through National FFA Organization, 317.802.6060, or by contacting G&R Farms at 912.654.2100. 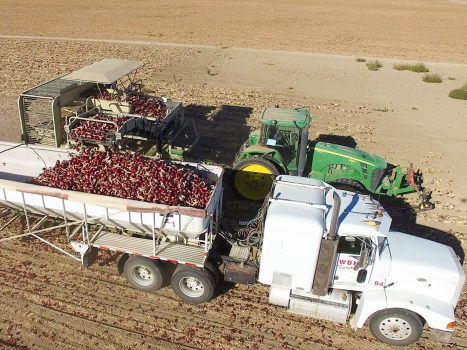