There’s no immediate answer to whether or not the recent bankruptcy measure filed by Hanjin Shipping Co., a South Korean container line, will impact onion exports, but the situation seems to have impacted other industries to the extent onion insiders are asking questions.

Stuart Reitz Department of Crop and Soil Science, Malheur County Extension Service of Oregon State University in Ontario, OR, told OnionBusiness.com, “The Hanjin bankruptcy’s going to make exports harder and more expensive to ship out of Seattle. They were the biggest ag export line from there. If buyers can’t arrange or afford shipping, then I guess a lot of Western Oregon and Columbia Basin onions would be coming back this way.”

He added, “Long range, it sounds like trucking companies might have troubles if Hanjin stiffs their creditors, which could tighten up the truck supply. Time will tell.”

Hanjin filed for bankruptcy protection in late August, and soon after questions arose concerning exports from the United States to receivers worldwide. As the questions piled up, so did abandoned containers. As of Oct. 3 as many as 15,000 40-foot cargo boxes either leased or owned by Hanjin were languishing in or around the California ports of Long Beach and Los Angeles.

A story posted on Oct. 4 at http://www.ocregister.com/articles/containers-730963-company-hanjin.html by writer Rachel Uranga said not only have the containers piled but, but also no one is sure what to do with them. She wrote, “They can’t stay here; the real estate is too scarce, especially ahead of the busy holiday season.”

Before filing for bankruptcy, Hanjin held the distinction of being the seventh-largest shipping company in the world. Attempts to get funding from the Korean Development Bank ultimately proved unsuccessful, and the abandonment of containers was heightened by stranded ships and crews – and, as Uranga reported, “billions of dollars worth of cargo in limbo.” Courts are working to get creditors paid, but in the meantime the containers are lying unused in ports around the globe.

One container company, Seaco Global Ltd. in London, reportedly leased about 50,000 containers to Hanjin that have not been accounted for. In addition, some ports won’t accept containers owned by Hanjin. One California logistics company, Total Transportation Services Inc., is looking to open a 100-acre facility in Ontario for container storage. Port officials were relieved to hear of that plan, the story said.

Globally the reaction to the bankruptcy was meeting with dismay. An Oct. 4 story on http://www.bloomberg.com/news/articles/2016-10-04/hanjin-shipping-could-have-survived-with-creditors-aid-cho-says said a number of international corporations were facing delays in holiday goods’ delivery. Samsung Electronics, for instances, saw some of its goods held up as Hanjin ships were stranded at sea. 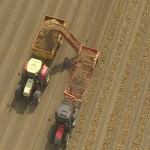