Hey, 2019! You want a piece of me? Nature’s Ninja kicks off in January

Since coming on earlier in 2018 as director of public and industry relations for the National Onion Association, René Hardwick has been working on ways to engage consumers with value, versatility, tastiness and good-for-you properties of onions. Starting in January, our favorite vegetable will be featured in social media and on the NOA’s website, www.onions-usa.org, as Nature’s Ninja.

We asked René about her inspiration, and she said with its sweet-to-pungent kick of flavor and nutritional punch, “Nature’s Ninja is the onion.’ She added that onions are “formidable [in helping] fend off disease, while also being resourceful enough to tempt our taste buds in a variety of forms.”

And, René said, there’s the field-to-fork connection as well. “It’s almost as if it was schooled in espionage,” she quipped. “It is the natural survivor — just getting out of the field is a battle of epic proportions!”

The new campaign is a way of “looking at the onion and all of its attributes,” René continued. “We in the onion industry already know its many traits,” but she noted that younger consumers – Millennials and Gen Zs – “perhaps don’t.”

Enter the Ninja. “Nature’s Ninja is a way to pique the younger crowd’s interest in the value of the onion and the good it can do in the diet — all of course with the ultimate goal of increasing consumption of onions.”

The campaign will kick off after New Year with a national release of an infographic, René said. “It will be highlighted on the www.onions-usa.org web page, coupled with healthy onion recipes, all with nutritional information provided.” And the campaign will be ongoing.

“We hope to stretch it out,” she said, adding that there’s the possibility of the lively mascot adorning T-shirts.

Attendees at this year’s NOA Winter Convention in Maui were treated to a glimpse of Nature’s Ninja when René, her husband René, her husband Toby and Norman “Snap” Keene performed a martial arts demonstration. Transferring her familiarity with martial arts to the promotions campaign, René can build on the program as it runs.

She said her experience in martial arts is “long but really uninteresting,” to which we politely disagree. She said, “I started about 14 years ago to show my daughter you finish what you start. She wanted to quit karate midway through her rankings, and I wanted to encourage her to keep working to get her blackbelt, even if it was difficult and took longer than she had hoped.”

Starting her training as an adult, René said, “I was a miserable martial artist at first.” She likened it to “learning how to walk all over again, and very frustrating.” But, she said, “I stuck it out, and so did my daughter. We both got our blackbelts about five and six years later, respectively. She moved on to softball, but I stuck with karate, eventually earning my second-degree black belt.”

Today René practices Kosho Ryu Kempo, which was brought to America from Japan via Hawaii, and Anshin Kai Do, which she said means, “the way of the peaceful mind.”

Correlating her own “Ninja skills” with promoting onions “seemed to dovetail perfectly,” she said. “The more I learned about the many nutrients it contained and studies that showed it helped fend off heart disease and cancers [as well as] the versatility in how it can be eaten, the more it seemed the onion also had ‘ninja skills.’ Thus, Nature’s Ninja was born.” 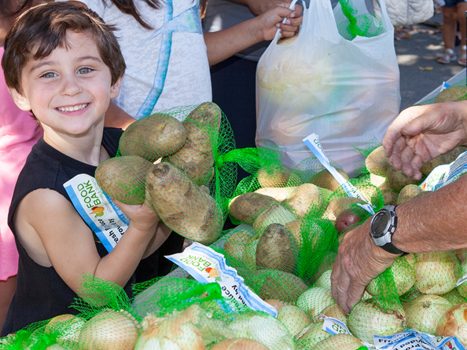