Two well-known and respected leaders of the Idaho-Oregon onion community received the industry’s highest honor on Feb. 6 when they were inducted into the Hall of Fame during the annual Idaho and Malheur County Onion Growers Associations meeting. 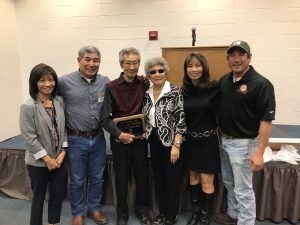 This year marked the 58th annual meeting, and the two men, Isao “Kame” Kameshige and Garry Bybee, were recognized during the Hall of Fame luncheon sponsored by Nunhems and Seminis Seed.

Kame, 92, has been a part of the Treasure Valley onion industry for 68 years, and Garry, 79, has grown onions in the Valley for 45 years – Kame in the Ontario/Cairo area, and Garry in the Nyssa region.

In addition to their longevity in the IEO onion deal, the two men also have in common fascinating personal histories.

Kame was born in Galt, CA, on April 13, 1925, and graduated from high school in Hollister in 1942. During WWII Kame and his family, as well as more than 100,000 others of Japanese ancestry in the United States, were moved to a relocation camp. The Kameshiges were in the Poston Relocation Camp in Arizona.

In 1944 Kame joined the U.S. Army and served in its Military Intelligence Services program, receiving his discharge in 1946.

And shortly after that Kame, his parents and sister moved to the While Settlement located between Vale and Ontario, OR.

Kame himself began growing onions in the Eastern Oregon area of Ontario and Cairo in 1949, farming 37 acres. The farm started with sugar beets on the 37, and over the years Kame added onions, wheat, and potatoes. Today he continues to grow onions as he has for 48 years.

He and wife Mary Kuwahara Kameshige married in 1952 and have lived in the same home for 50 years. They have three children: son Randy and his wife, Janie; daughter Ellen Joyce and her husband Tom Masterson; and son Brian and his wife Janette. Kame and Mary also have six grandchildren and one great-grandchild, and the bio on Kame read during his induction said the youngest members of the family have “proved to be smart enough not to be farmers!”

Until he was 88 years old, Kame drove 10-wheel trucks during potato and onion harvest season, and he was behind the wheel of his tractors until he hit 90. He says it was with the “assistance of Monster energy drinks to help keep him awake.” These days Kame drives the pickup to “taxi workers around the farm when he is needed.”

When he hasn’t been in the fields, Kame has served as president of the Idaho-Oregon Buddhist Temple and the Ontario Investment Club. He has also held the position of treasurer of the Ida-Ore Buddhist Temple, the Snake River Japanese America Citizens’ League, the Ontario Nisei Golf Association, the Ontario Investment Club, and the Malheur County Potato Growers Association. From 1970 to 1975 he served as a representative to the Oregon Potato Commission.

And he was a member of the Malheur County Onion Growers Association Board from 1979 to 1988, serving as its treasurer from 1984 to 1988. In 1987 Kame was named Agriculturist of the Year by the Ontario Chamber of Commerce.

In addition, he has long enjoyed fishing and golfing, and of the latter, he says he’s enjoyed it enough to card five hole-in-one shots.

Kame’s two sons, Randy and Brian, currently run the family farm, where they grow onions and other crops on 700 acres, while Kame “bites his tongue and only winces at their mistakes.” 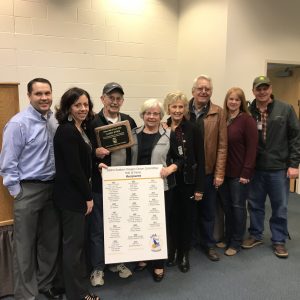 Compatriot and fellow Hall of Fame honoree Garry Bybee was born in Rupert, ID, on April 2, 1938, to Sherman and Virginia Bybee, and he has two brothers, Jay and Ray, and one sister Colleen. A true Nyssa boy, Garry attended school all the way from elementary through 12th grade, graduating from High in 1956. That year he made FFA State Farmer, and he was the FFA Reporter during high school.

He said that after having grown up on a farm and doing farmer things such as milking cows, setting water and driving tractors, he knew one thing for sure: He didn’t want to be a farmer.

One childhood memory goes back to 1945, when Garry sold soda water in the Owyhee Produce warehouse. Fast-forward a few years to another memory – prior to heading off to college, Garry was put in charge of that operation by his dad.

Garry graduated from Utah State in 1960 with a double major in Accounting and Economics. He said he didn’t know what he wanted to do when he graduated so he “came back to Nyssa and worked as a USDA Inspector.” But he said he realized the inspection service wasn’t for him, and he returned to Utah to work for Thiokol Chemical Company as a planning specialist and working on the Minute Man Missile Program.

It was after he moved back to Utah that me met Ronda, and the two married in 1963. Not long after they married, the couple moved to Arizona where Garry went to work for Motorola, holding a variety of positions. While he was with that company he also attended Arizona State and took a one-year seminar for middle management. He spent a year at the Management Institute.

During his time at Motorola, a friend asked Garry what his family did in Nyssa, and Garry told him they were in the onion business. Garry’s friend suggested the two sell onions. Game on.

Garry’s bio said, “Motorola has a worldwide system,” and the onion entrepreneurs received a reply from Japan shipped more than 100 containers of the onions to that country.

“In 1973, as a result of that transaction, Fiesta Farms Co-op offered Garry a position and he took it,” the bio continued. “In 1996 Garry bought out the members of the co-op and Fiesta Farms Inc. was formed. Garry has been with Fiesta Farms for 45 years.”

And he sat on the IEOOC Export committee from 1993 to 2005, serving as vice–chairman from 1995-2005. When on that committee he attended trade shows on behalf of the industry in Japan, Hong Kong, Taiwan, China, Singapore, Mexico City, Guadalajara and Leon. He’s also traveled for Fiesta Farms and visited Taiwan, Japan and Canada.

Sitting on numerous special committees for the Idaho-E. Oregon Onion Committee, Garry been a part of the Hall of Fame Committee since 2006. He was also on the board of directors for the Idaho-Oregon Fruit and Vegetable Association from 1989/1990 to1996/1997, holding the position of president in his final year of the board.

He was a board member for a Malheur County committee founded for port district consideration in the 1970s, and he is secretary of Sun Top, Inc. for cull disposal of onions. He is also VP and secretary of Certified Onions, Inc., and he’s a member of the National Onion Association Industry/Export Committee.

Garry and Ronda have three children: sons Todd and Marc and daughter Misty. They also have eight grandchildren and two great-grandchildren, with another one on the way.

Garry has said that as ornery as he is, he “couldn’t have done anything without Ronda’s support.” Over the past few years Fiesta Farms operations have been turned over to Marc and his wife, Tamara, and Garry has said he’s very pleased to see “the operation continue to run in the same manner as it always has,” adding that it “is gratifying to see something that he had spent so much time in and worked so hard to build continue to run at even higher standards.”

In thanking the Hall of Fame Committee for his induction, Garry Bybee said, “If I have been successful, it is because of my business associates, various farmers, my friends and the onion industry people who have helped me along the way. What a ride!” 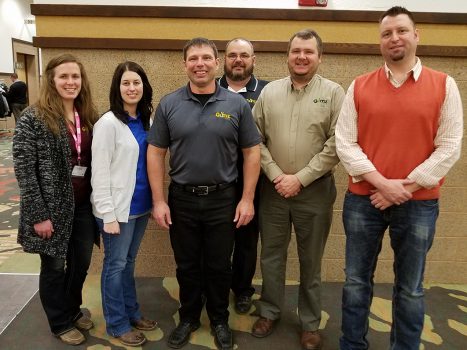