As 2019’s Idaho-E. Oregon Spanish Sweets start to come in from the fields this week, the Treasure Valley is sharing its onion love in a number of high-visibility programs.

In addition to a new 40-page marketing tool cookbook that features professionally developed recipes and photos, signage along the region’s highways is also highlighting the crop.

In an Idaho-E. Oregon Onion Committee promotional effort, four large, bright and colorful billboards have been strategically placed throughout the region on property owned by onion growers or shippers. One especially notable billboard is on a red barn owned by Ken Teramura, and it’s been featured in travel magazines as a “must-see” for travelers going through the Treasure Valley. Now in its 15th year, the billboard program was started to educate truckers who haul the onions.

And the Nyssa Chamber of Commerce and Agriculture has longstanding sign program that highlights a variety of crops, including onions, potatoes, sugar beets, corn, shallots and wheat “and anything else that is grown” in the area, according to Jason Pearson, sales manager at Eagle Eye’s Nyssa office and member of the city’s chamber.

“We have signs built with different commodities on them and, we sell sponsorship of those signs to local businesses,” Jason said. “For instance, Eagle Eye/ Fiesta sponsors an onion sign, and we put it up on the highway showing every passerby the commodity and the sponsor company.”

Jason said the signs have been in place for several years, erected after the crop is planted, “We don’t necessarily tell anyone who the grower is, just what the crop is,” he said. “Lots of people drive by and do not know what it is that they are looking at. We show them, so they know what grows in our great area and what the plants looks like.” 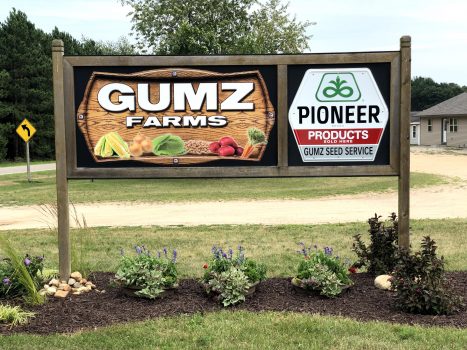