Super colossal onions provided to the Oregon Department of Agriculture by IEOOC shippers were enthusiastically received by several chefs competing in the United Tastes of America Asian Chef Challenge held Feb. 9 and 10 in Tokyo, Japan.

According to Theresa Yoshioka, Oregon Department of Agriculture International Trade Manager, the event was the last in a series of chef challenges for Northern Asia.

“The competitions to determine the winning teams form Taiwan, Hong Kong, China and S. Korea have already been completed,” Yoshioka wrote to IEO shippers on following the Tokyo contest.

“Last night’s winning team will face the other four regional winning teams for a final competition in Japan on March 23.”

She added that for the Japan event, 20 chefs comprising 10 teams took up the challenge. “They made appetizers, soups, entrees and desserts using the U.S. ingredients provided by 20 sponsors.”

Yoshioka said the super colossals were a particularly big hit – and a surprise.

“Many chefs in the contest, and cooking school that hosted the contest, were surprised to see such big onions,” she wrote. “The head judge for the Japan contest and for the other four United Tastes of America Chef Challenge events across Northern Asia praised the onions. He told me that he was planning to take a couple onions in his bag when he goes back to Sri Lanka.”

She also commented, “When asked which ingredients the chefs had used for the first time in the contest, one chef mentioned kale and another mentioned the big onions from Oregon.”

On Feb. 10, the last night for the Oregon contingent’s visit to Tokyo, event judges and Miss Oregon posed for photos, and Yoshioka said, “Due to some plot twists in getting the super colossal onions to Japan, I ended up with some extra onions in Tokyo. The onions that remain after the judges take their samples, will be set aside for a cooking demonstration that is planned in two weeks at FOODEX 2016.”

Set for March 8-11 in Makuhari Messe, Japan, the 41st annual FOODEX will feature 3,000 exhibits from 79 nations. It is largest food and beverage show in Asia, and headlining the cooking demonstration in the USA Pavilion will be none other than celebrity Chef Tyler Florence, who provided cooking demos in the Idaho-Eastern Oregon Onion Committee’s booth at the 2009 PMA Fresh Summit in Anaheim, CA. 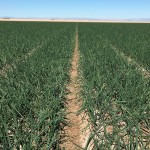