IEO weighs in about UP acquisition of Railex

The Jan. 3 announcement that Union Pacific had acquired Railex LLC’s refrigerated and cold storage distribution assets in Delano, CA, Wallula, WA and Rotterdam, NY, has prompted conversation in the Treasure Valley of Idaho-Eastern Oregon, where a transportation hub to be serviced by Railex had been in the discussion stages for several months. Several onion packers commented on the news.

In late June 2016 two Oregon State Legislators, Rep. Cliff Bentz (R-HD 60) and Greg Smith (R-HD 57), both of whom are on Oregon’s Joint Committee on Transportation Preservation & Modernization, took part in a discussion that examined the feasibility of an intermodal transportation hub in the Ontario/Nyssa/Vale area of Eastern Oregon.

While much of the dialog at the meeting centered on rising freight rates, participants also discussed shipping times, with Rep. Bentz quoted as saying Railex had established a track record for providing timely service.

On Jan. 4 several major shippers in the Treasure Valley weighed in on the acquisition’s impact on Idaho-Eastern Oregon’s onion industry and the possibility of moving forward with the transportation hub. Steve Baker at Baker Packing in Ontario, OR, said, “In the short term I don’t think UP’s acquisition of Railex will affect us for now.” He added, “In the future it remains to be seen if it has any effect on our area.”

And Grant Kitamura with Murakami Produce LLC in Ontario, OR, commented, “The whole premise of Railex service is door-to-door service with relative speed. If Union Pacific can match that service and speed, there will continue to be a lot of interest in the Treasure Valley to move forward with a hub.”

Kay Riley at Snake River Produce in Nyssa, OR, said Railex had been “very successful as an independent company and showed all the motivation that goes along with that independence.” He added, “Union Pacific is a giant, and the giant swallowed the independent up. Will Union Pacific be as driven as Railex has been? I’m not sure. But I am optimistic about the longevity of the service, and I hope Union Pacific runs Railex as successfully as Railex did.”

Another viewpoint came from Garry Bybee with Fiesta Farms in Nyssa, OR. Garry said he was not convinced such a transportation hub would happen in the Treasure Valley. Noting the financial clout of Union Pacific, Bybee said, “I think it’s a good deal they purchased Railex.”

Railex will continue managing its Western facilities during the transition and integration of its operations with Union Pacific. 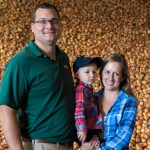