IEOOC heads to Miami for Americas F&V Show in September

The Idaho-Eastern Oregon Onion Committee is among nearly 500 exhibitors planning to be at the 21st Annual Americas Food and Beverage Show Sept. 25 and 26 at the Miami Beach Convention Center in Miami Beach, FL.

The show, which draws attendees and exhibitors from all corners of the world, is a key event for both importers and exporters. Although exports represent a small volume of the Idaho-Eastern Oregon onion production, generally between 3 and 5 percent, it is an important market segment that the IEOOC Export Committee works to enlarge.

As the largest onion-growing region in the United States, the Idaho-Eastern Oregon growing region has some 21,000 acres planted and last year shipped approximately 36,000 carlots of Spanish onions to receivers both inside and outside the country.

IEOOC’s federal marketing order represents more than 300 growers who farm the ground and 32 shippers, 20 of which are exporters.

Jensen said the trade mission to Mexico “was very productive,” providing “very good information and contacts for that market.” It also provided insight “both to understand their imports to the U.S. and how we can best capitalize on potential exports to Mexico.”

The increase in market share outside the U.S. can be attributed largely to expanding programs through government grants.

IEOOC Executive Director Candi Fitch works with the Export Committee in securing the grants and said that over the past several years Mexico and Canada have been the primary countries for exports. But, she noted, the Export Committee and shippers are always looking at new possibilities.

She added that using funds received through Specialty Crop Grants, the Export Committee has increased its activities and its presence is a number of areas.

She said the grants are administered through the Idaho State Department of Agriculture from funding it received through the U.S. Farm Bill.

For 13 years, from 2004 through 2017, the Committee has received approximately $200,000, and Fitch said special promotions include one for yellow onions in Mexico. She said it reaches retail and foodservice markets through in-store demos, menu promos and chef training at Mexican culinary institutes.

IMALINX (an international marketing firm for the produce, food and beverage industries and cooperator for the program) calls on wholesalers during the promotion to provide them with more information on IEO onions’ availability and quality.

The Export Committee has also taken part in trade missions to Central America, Mexico and Taiwan, and Harman will be among those going on Idaho Gov. Butch Otter’s November trade mission to Taiwan. 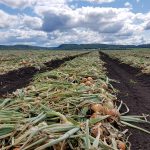 Market and Crop Updates for Sept. 7