A trio of Idaho-E. Oregon Onion Committee representatives were part of the 100-plus member group who traveled with USDA Secretary Sonny Perdue on an outbound trade mission to Mexico early in November.

The three – Alejandra Taylor, Wyatt Poole and Dar Symms – are from member operations that produce onions in the Treasure Valley. Taylor and Poole are employed by Eagle Eye Produce, and Symms is with Symms Fruit Ranch.

Traveling with scores of industry and government reps on Nov. 6-8 trade mission, IEOOC’s contingent was part of the effort to “forge new opportunities with U.S. agriculture’s largest bilateral trading partner and second-largest export market,” according to a USDA Office of Communications document. In addition to Secretary Perdue, the governmental group included Under Secretary for Trade and Foreign Agricultural Affairs Ted McKinney.

Following the event, Secretary Perdue was quoted as saying a formal bilateral meeting had been held with Mexican Agriculture Minister Víctor Manuel Villalobos Arámbula, with several key issues, including labor and immigration, discussed. Also, an invitation was extended to and accepted by the Mexican official to attend the USDA Agricultural Outlook Forum in February.

Secretary Perdue said it was agreed that the H-2A program modernization will help provide a labor pool for U.S. companies.

OnionBusiness is fortunate to have a first-hand account of the trip from Alejandra, an export salesperson who has been with Eagle Eye for 11 years, and Wyatt, an export sales support specialist with one year at the company.

“The mission itself was hosted at the Presidente Intercontinental Hotel in Polanco, Mexico City, Mexico,” they said. “At the mission there were government officials from both countries and food importers. Together with Dar Symms, we had the privilege to represent the Idaho-E. Oregon Onion Committee, and our goal was to promote trade through exporting the onions locally grown in our beloved state to foreign markets.”

Noting that Mexico is the largest export market for Eagle Eye Produce, Alejandra and Wyatt said they “have been blessed to establish strong relationships with hard working people in that country.” The company also exports to other countries and U.S. territories, they said, adding that global trade “is beneficial not only for national GDP but also for the end consumer.”

And they said the mission to Mexico City was “beneficial for all parties involved,” with opportunities to discuss exporting onions from the IEO growing region to Mexican receivers.

“The interesting opportunity Mexican markets present regarding U.S. onions is the fact that [Mexican] domestic product is insufficient to sustain the market demand year-round. For the moment, we help fill the supply needed during the product shortage that occurs throughout the end of fall into the start of spring each year,” the export specialists said. “With this being said, new contacts and relationships were made from our experience. The B2B meetings gave us time with potential buyers who were seeking to develop their import division within their companies.”

Although there was not a retail tour per se, the group did visit La Central de Abastos, a food market that is divided by commodity. Alejandra and Wyatt said onions “have a strong pull in the fresh products section.” And the group had the opportunity to “visit customers with whom we do business with and strengthen our relationships.”

At La Central de Abastos, they said, there are “several small warehouses where companies either hold the products for resale or repack facilities are provided by most companies to help minimize loss due to decay or poor presentation.”

For IEO shippers and the entire onion community the trade mission was very beneficial, the reps said, adding that new “opportunities await each person looking for the opportunity to either break into the Mexican markets or maintain the relationships they’ve created there.” They said, “We are striving to gain a greater market share of the Mexico market as the Idaho-E. Oregon Onion Committee.”

View more photos from the mission, courtesy of Alejandra Taylor 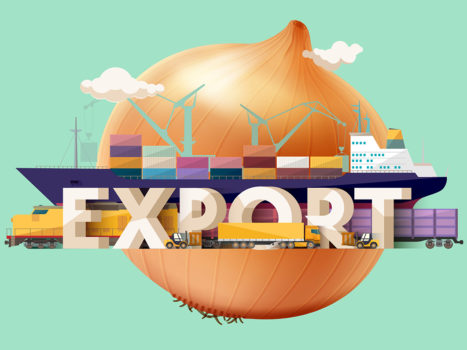