Changing the expo days to Friday and Saturday at this year’s PMA Fresh Summit, set for Oct. 19-21 in New Orleans, could well result in additional attendance, according to IEOOC/USA Onions Promotion Committee Chair Herb Haun.

Herb, in touting the great positioning of USA Onions in Booth 4545 on one of the show’s thoroughfares, said moving the convention expo so Sunday is the travel day rather than Monday was insightful on the part of PMA. Traditionally the expo has closed down on Sunday, putting attendees on the road Monday and back at their desks on Tuesday.

Haun said the new format could bring more shippers to the show, resulting in more networking and additional sales. Herb said, “We anticipate more participation from shippers who’ve either not made it to the show in the past or who’ve left early to be at sales on Monday. When the show was on Saturday and Sunday, it was almost impossible for them to be at the show for two days.”

He added that customers have told him and other committee members they appreciate the one-on-one networking opportunities that PMA Fresh Summit provides.

Several IEOOC shippers will be on hand to man Booth 4545, a 20X20-foot structure that will also be staffed by professional greeters. The booth will have collateral material produced by the committee, and the popular promotional video will be run during the show. Herb said the video shows the Treasure Valley’s onion industry “from planting to harvest,” and he said the promotional materials handed out will reinforce the reputation of the region’s famed Spanish Sweet onions.

In addition, he said, the greeters will hand out reusable thermal-lined grocery bags to booth visitors. 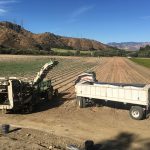 Photos of the Week – Piru, California