Hailey, ID-based PROSOURCE Inc., a grower-owned sales and marketing operation that services a national and international customer base, announced recently that Golden West Produce is being rebuilt and will add to this year’s onion volume.

According to a press release from PROSOURCE’s Corey Griswold, construction of Rio Valley Onion in New Mexico was completed in April, and Golden West Produce’s new facility in Parma, ID, is scheduled to be finished in August, just in time for the new season.

Golden West was located for many years in Nyssa, OR, and was one of the hardest-hit facilities when January’s record snow and later ice caused building collapses in the Treasure Valley of Idaho-Eastern Oregon. Construction of the new packing facility and three storages began in March, and production is expected to start in the Parma operation during the last week of August.

Corey noted, “Having new packing facilities and increased curing and storage capacity in both of our major onion shipping geographies will allow PROSOURCE the ability to provide our customers with a consistent 12-month supply of the highest quality onions available from the farm to the consumer.”

The facility has built-in curing capacity for 6,000 bins of harvested product to ensure ample curing time for a higher quality packed product. In addition to packing all of the onion acreage produced by Kit Carson and Lack Farms, Rio Valley Onion will contract additional volume to be packed with outside growers in both New Mexico and Mexico. 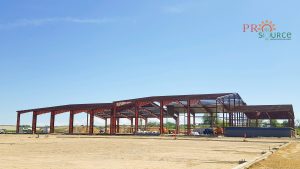 In Parma, the Golden West Produce project will consist of a 65,000-square foot packing and shipping facility and three new storage facilities. The packing equipment will be state-of-the-art and fully automated, including an eight-lane MAF sizer, internal and external defect detection technology, two ERC automated bagging lines, Volm pack consumer line, stickering line, tote filling station, and a presorted hopper with capacity for up to 300,000 pounds of presorted raw product.

At full capacity Golden West Produce will be capable of producing between 3,000 to 3,550 50-pound packages per hour.

The grower-owned and operated sales and marketing PROSOURCE was founded in 2010 to “more effectively and directly market the crops of our growers and to provide a consistent supply chain and customer service experience to our customers.” Today the company services a wide-range customer base comprised of foodservice, retail, wholesale and broad line customers in the United States, Canada, Mexico, and Central America.

Check out the PROSOURCE video about their exciting construction projects!

Y’all and All Y’all best be listening up! Shuman launches ‘How to Speak Southern 2.0’ 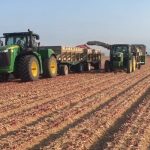 Market and Crop Update for May 25