News out of SoCali is that the crop is looking good, and the season should commence in late April.

“The fields look absolutely amazing,” Trent told OnionBusiness on March 20. “We have around 285 acres there, with more than 200 acres of yellows and the balance in red and whites. Our signature Imperial Valley variety, Don Victor, looks fantastic, and we are very excited about marketing this crop.” Trent added, “For sure we will be shipping the last week in April. We had hoped to start a little earlier, but colder weather early on set us back about a week. But the crop is very healthy with no signs of seeders. Depending on how it goes, we could start harvest around April 17, but we will be watching the crop closely over the next several weeks.” Many thanks to Trent for sending recent photos of the Calipatria crop.

Also reporting in this week was Robert Bell with Wester Onion in Camarillo, CA, who told us Gerry Valois with WO had also recently visited the Imperial Valley. Robert said Gerry’s assessment was that “the crop looks good and is starting to size up so we’re a month away.”

John Vlahandreas with Wada Farms visited the Troy Caston operation in Brawley last week and said that everything looks good. “Let’s face it – everyone is behind. There is no way anyone is going to get going on April 15. The weather put everyone behind. We still have three more waters to go. Troy will probably start bringing in onions in on April 22 or 23, with an anticipated start date around April 29.” Many thanks to John for sending recent photos of Troy Caston’s Brawley, CA crop which includes our featured image.

On the process side, Steve Gill with Gills Onions in Oxnard told us, “We’re starting to receive more inquiries about processed onions due to not only the general cost of doing business with key factors like labor/minimum wage and freight that continue to go up rapidly, but also now combined with current market conditions.” Steve continued, “We are at the end of our storage season with no excess inventory, and our harvest will begin around April 10 with our Imperial Valley crop, which is looking very strong as temperatures rise in the desert.” And, Steve added, “Our Kern County crop also remains strong and we are starting to plant in King City.” 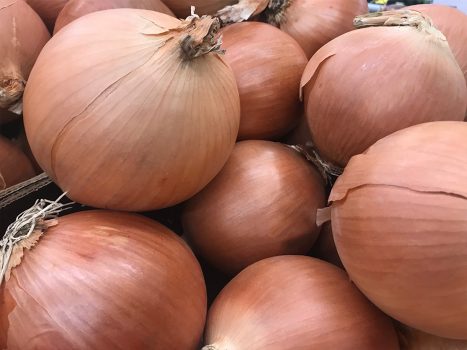