Indicators good for IEO this year

It appears that the stars may be aligning for IEO shippers this season.

Dan Phillips, sales manager for Central Produce Distributor Inc. in Payette, ID, told OnionBusiness.com recently that so far everything has been going well for the Idaho-Eastern Oregon growing region in every respect.

“While in past years there have been a couple of indicators that project a favorable market, this year the indicators are than more than one or two,” Phillips said.

He noted that the season started early, 10 days to two weeks in most cases, and there was high buyer interest from the jump.

Also, supply/availability is projected to be off what it has been in past years. Steady and heavy movement has prevented the market from bottle-necking and slowing down.

The week of Sept. 28 saw buyers approaching IEO shippers with interest in contracting, which Phillips said is virtually unheard of this late in the game.  Most contracts are negotiated well before the start of the season.

And Washington is exporting more onions out of the gate, providing more opportunity for IEO in domestic markets.

Dan said these indicators combined may lead to IEO shippers feeling better about a market push earlier than normal, and the shippers themselves are “looking forward to seeing this become reality.”

Grant Kitamura, president and GM of Murakami Produce in Ontario, OR, concurred, saying, “”It is very rare that we see the market hold so well and with such strength at this time of year, while we’re still in harvest.”

Grant said harvest in the Treasure Valley is approximately 60 percent complete, and he explained, “This strong market is an indicator of how well IEO onions and their quality are being appreciated by customers. It appears that IEO is the premier region for sourcing onions right now, and there is a lot of optimism out there that this will continue.” 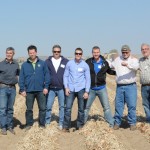