Comments from the Idaho-Oregon Fruit and Vegetable Association pertaining to the proposed termination of the S. Texas Marketing Order 958 have been posted on the AMS/USDA website, https://www.regulations.gov/document/AMS-SC-21-0003-0001 in an effort to retain the order and mitigate a “competitive disadvantage” eliminating the marketing order would create.

The comments were posted Sept. 15 and have the heading, “Comments in regard to ‘Onions Grown in South Texas and Imported Onions; Termination of Marketing Order 959 and Change in Import Requirements,’ Agency/Docket Numbers: Docket No. AMS-SC-21-0003, SC21-959-2 PR.” The narrative begins, “The Idaho-Oregon Fruit and Vegetable Association (IOFVASN) represents the onion shippers in Idaho and Malheur County Oregon. This region is one of the largest onion growing areas in the United States and the shippers in this area ship onions starting in August into June of each year. The onion growers and shippers in this area fall under Marketing Order #958.

“In the proposed rule that is currently in the comment period, ‘Onions Grown in South Texas and Imported Onions; Termination of Marketing Order 959 and Change in Import Requirements,’ it is asking for the removal of the South Texas Marketing Order #959. The members of IOFVASN ask that M O. 959 be left in place.

“Because the growers and shippers under M.O. 958 have onions into June, three months without import regulations would put the Idaho and E. Oregon onion growers as well as all US onion growers at a competitive disadvantage. The shippers and growers in this area would still fall under the grading and inspections requirements of M O. 958 and imported onions for that three-month time frame would have no inspections and grading requirements to follow.”

The issue, which started last fall as the result of a failed referendum that caught Texas shippers as well as much of the domestic onion industry by surprise. According to Greg Yielding, executive vice president of the National Onion Association, the South Texas Onion Committee’s marketing order “requires USDA to conduct a continuance referendum every six years. The USDA did just that last fall, in which only 57 percent of the STOC producers (representing 53 percent of onions produced) favored continuance. To continue, two-thirds of the producers voting, or those representing two-thirds of the volume produced needed to vote in favor.” The NOA September newsletter noted, “Last fall, however, many growers in Texas, as elsewhere, were dealing with COVID 19 and labor shortages, not to mention horrific weather. Many have said they were not even aware that the USDA held a referendum on the marketing order.” Yielding said, “Some people didn’t know there was a vote. There was COVID, and many weren’t even getting in their mail.” He added, “I haven’t spoken to one grower in Texas who wants this marketing order to go away.”

The NOA further said loss of the marketing order will “spell trouble for the entire onion industry. In fact, it could drive down prices and render grade standards moot, bringing down the entire domestic onion industry.”

Nonetheless, earlier this year USDA proposed termination of the marketing order “and the rules and regulations issued thereunder” as the result of the insufficient vote to continue as indicated by the referendum. The comment period was established, and comments will continue to be accepted until Oct. 4. They must be submitted to the Docket Clerk either by email, post-marked mail, or online at https://www.regulations.gov/document/AMS-SC-21-0003-0001

In its posted comments, the IOFVA continued, “If it is decided that M.O.959 is terminated, then we ask that the import regulations for onions found under 8e Code of Federal Regulations 980.1 17 have the focus that is now tied to M O. 959 changed to M O. 958. As outlined in the code, excerpts from the code below, it states that pearl and Cipolline onions during the entire marketing year are required to follow M.O. 958 for the entire year. It is our understanding the reason for that is the Idaho-E. Oregon Onion region is in most direct competition for the pearl and Cipolline onions.

“We feel that it would be safe to say that all onions coming into the country are in direct competition with the Idaho-E. Oregon Onion region and the dates could be easily changed, for example: ‘(1) During the period June 5 through March-9 June 4 of each marketing year, whenever onions grown in designated counties in Idaho and Malheur County, Oregon, are regulated under Marketing Order No. 958, imported onions shall comply with the grade, size, quality, and maturity requirements imposed under that order, including pearl and cipolline.

“Under the import regulations, it talks about how the marketing of onions can be reasonably distinguished by seasonal categories. As outlined in the graph that is attached [to the online comments] showing a 14-year comparison of acreage and production for Idaho-E. Oregon Onions and Texas onions, one can see this is no longer the case. The other graph that is attached shows that Idaho and E. Oregon and Texas ship similar carlots of onions during the months from March through June.

“This reinforces that the marketing of onions can’t be reasonably distinguished by seasonal categories. Given the amount of onions that come out of Idaho-E. Oregon and the fact that the shippers in this area ship onions from August into June, the Idaho and Eastern Oregon growing region is the area that is in direct competition year-round. The change to move the focus from M.O 959 to M O. 958 would not impose any new import regulations; it would just adjust the current import regulations and show what is reflective of today.

“Numbers collected by the IOFVASN for the past six seasons show that the six-year average for year-round shipments into June from the Idaho-E. Oregon growing region averages about 35,503 forty-thousand pound carlots per season. Where in comparison the USDA numbers show that for the past six years, Texas has had average shipments of 6,759 forty-thousand pound carlots per season.”

Attached to the comments is a graph “showing a comparison of yield per acre for Idaho-E. Oregon and Texas. However, taking that back even further the USDA numbers show that in 1977 the Idaho-E. Oregon onion growing region’s acreage was 480 cwt. This increase in acreage over the years has come at an expense: new technology for packing sheds and growers, new sizing equipment in the packing sheds, computers in tractors, general automation, research, and new irrigation methods to assure we are providing the best quality onions.”

The comments continue, “These changes have required more employees in production. If the import regulations are not refocused, growers in the Idaho-E. Oregon onion region feel that they would need to end their production early so as to not compete with uninspected imported onions. That would create a huge loss for the growers and shippers in this area.

“With the introduction and implementation of the Food Safety Modernization Act, shippers and growers have had increased costs to make sure the onions sent to market are safe and meet the necessary requirements. Again, these standards imposed on domestic growers are not closely monitored or regulated on onions grown in other countries coming into the United States. ‘Unless explicitly exempted, companies who import food into the United States are required to have Foreign Supplier Verification Programs for foods they import.’

“Recent FDA Inspection data indicates that 40% of inspected importers were out of compliance with the rule.”

National Restaurant Association Show set for May 21-24 in ‘22 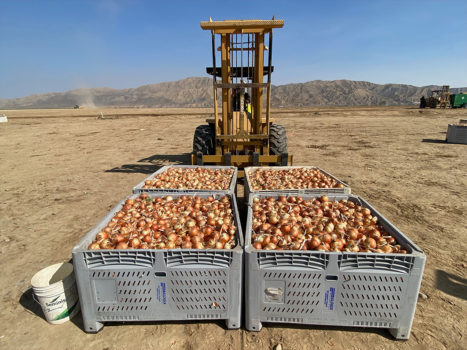