A group of Japanese industry executives arrived in the Idaho-Eastern Oregon onion growing region on Wednesday, Oct. 4, as part of a Northwest tour.

During the tour, which included an exchange of both ideas and information with Northwest onion exporters and professionals, the business execs visited sheds and fields in the Treasure Valley. The tour was led by Stuart Follen, president of SL Follen Co. of Portland, OR, and Tsugu (Takatsugu) Ochi, director for Tsukiji Sangyo Co. Ltd based in Japan. OnionBusiness’s Sherise Jones accompanied the group on one of their stops.

Members of the group represent either Japanese Agricultural (JA) Ministry or Hokuren, which is a privately held cooperative that establishes the market and coordinates sales with members of the JAs.

Sherise explained that the entourage arrived in Seattle on Sunday and toured a number of Washington sheds before arriving in Idaho and Oregon on Wednesday. While in the Treasure Valley, the group toured Jamieson Produce Wednesday morning and Fry Foods Wednesday afternoon. Thursday’s schedule includes Baker & Murakami Produce in Ontario, OR, and JC Watson Packing in Parma, ID. 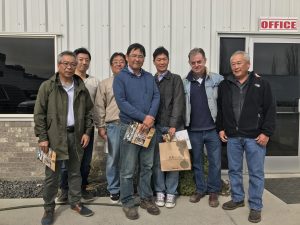 Prior to touring Fry Foods, the group sat down with Baker & Murakami Produce CEO Grant Kitamura to exchange information about Idaho-Oregon’s onion region and the Hokkaido region the Japanese businessmen represent. The meeting provided a good opportunity for the Japanese group to learn more about Idaho and Oregon, and great insight was provided about Japanese onions as well.

Toyoshi Mori explained the companies and structure and who they represented. The Hokuren is a privately held company that assists Japanese Agricultural Ministries and their growers with technical training and assistance funded by grower contributions and government subsidies. Together, the Japanese Agriculture Ministries/JAs and Hokuren establish Japanese onion markets, with Hokuren having controlling interest in sales.

Mori said that this year the Hokkaido program has grown about 6 to 7 percent, and plans are in place to export onions to Taiwan. He further explained that exporting to Taiwan helps in a processing market heavily dominated by the Chinese.

According to tour guide Masashi Oochi, Japan has about 1,500 individual growers, each farming approximately 50 to 60 acres or 25 hectares. Of those, approximately 10-12 hectares or 25 acres are planted in onions.

During the meeting, Follen commented that exports of Northwest U.S. onions to Japan continue to decline, in part due to freight costs and the increased dominance of Chinese onions in processing.

After having a thorough look at the onion industry in Washington and Idaho-Oregon, the group will depart for home in Japan this weekend. 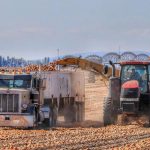 Market and Crop Update for October 5