With an official update coming soon from the USDA Agricultural Affairs team in Tokyo, Japan, OnionBusiness.com can provide some recent damage assessments made after a series of four typhoons pounded that country.

According to Theresa Yoshioka, International Trade Manager with the Oregon Department of Agriculture’s Agriculture Development and Marketing Division, estimates are coming in that up to 30 percent of the 2016 crop could be damaged.

“As harvest is happening now, the final numbers are not yet known,” she said. “They expect to have more information in the first part of October.”

Theresa said the USDA did release the following statement: “The Japanese onion crop has had a rough year of it with disease issues in the south followed by four successive typhoon strikes in Hokkaido in August/September. The price of onions had already risen steadily to about double the price last year, and we will check on the price from Hokkaido in the next week.”

The storms have also restricted transportation, and Theresa said the USDA reported, “The rain and resulting mud have caused damage to the onions in the field and to roads to get the onions out of the fields. They’re having difficulty harvesting in the wet conditions, so the level of damage due to sitting in mud prior to, and then further damage following harvest have yet to be evaluated.”

The report went on to say that distribution issues will “hurt marketing further as some roads from the fields to the markets have been damaged. One rail line was closed last month, and [reporting party had not] heard yet if it’s reopened.”
Furthermore, it’s expected the situation will result in “a good year for producers and exporters to discuss increased volumes in their shipments – especially as the marketing year comes to a close and domestic supplies draw down.” 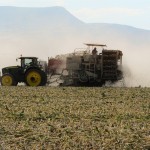