Surrounded by family and friends from near and far, Treasure Valley onion industry icon Joe Saito celebrated his 100th birthday at an April 21 gathering in Ontario, OR.

Joe, whose official birthday was Sunday, April 22, basked in the attention and swapped stories with the well-wishers as his wife, Nellie, children, grandchildren, and great-grandchildren all shared in his excitement.

Well-known and respected not only as a leader in the Idaho-Eastern Oregon onion industry but also as an American patriot who was awarded the Congressional Gold Medal in 2012 for his World War II U.S. Army service as a medic, Joe is a man of many firsts. And his accomplishments did not come easily but rather through his will and determination to succeed and, moreover, to excel.

Born in Portland where he spent his first 16 years on the family farm east of the city, Joe and his family moved to Ontario in 1934, and his father farmed potatoes, onions, and sugar beets. Fewer than 10 years had passed when the Saitos and other Japanese-Americans were caught up in the tragic events of Pearl Harbor and World War II.

On Dec. 7, 1941, Dec. 7, 1941, Joe was already serving in the Army as a medic and was on an ocean liner headed to Hawaii when the attack took place. Following the bombing, Joe and other Japanese-Americans in the military were sent back to the mainland United States, where they were relieved of all service-related duties for several months. Eventually, the U.S. military called for volunteers to form an all-Nisei (American-born individuals whose parents had come from Japan) regiment, and Joe was among the nearly 4,000 who answered the call.

Many of the enlistees had no prior military experience and, along with Joe, were trained for combat as the 442nd Regimental Combat Team/Military Intelligence Service and 100th Infantry Battalion in Shelby, MS.

Joe, who was a trained medic, assisted in training others in that field, and as many of his fellow servicemen left for the battlefields of Europe, Joe continued to teach others the necessary skills to save lives in combat. On Nov. 2, 2011, the members of the 442nd and 100th were awarded the nation’s highest honor awarded to civilians, the prestigious Congressional Gold Medal. In a separate ceremony on Jan. 14, 2012, in Seattle, Joe and his Band of Brothers were told lauded for having “performed an achievement that has an impact on American history and culture that is likely to be recognized as a major achievement in the recipient’s field long after the achievement.”

Nellie, it should be noted, was also tremendously affected by the war. The bombing and America’s entry into World War II resulted in the internment of some 110,000 Americans of Japanese descent. Nellie and her family were initially relocated to Quincy, WA, and then moved to an internment camp in Idaho, where they were housed for several months.

During the period between the Pearl Harbor bombing and Joe’s restationing in Mississippi, Nellie’s family was permitted to move from the Idaho internment camp to a farm in that state, where the family worked the fields alongside German war prisoners.

She also worked at a dress shop in Boise, and a mutual friend introduced her to Joe. Though Joe left for Mississippi, the two had established a relationship that is now the stuff of legend.

At the end of the war, Joe returned to the Treasure Valley and attended Boise Business University. He and Nellie married in 1947, and Joe expanded the family farm from its original 40 acres.

Joe’s skill in growing onions was becoming known nationwide, and throughout the past six decades, he’s accomplished what few others can claim.

In addition to being active in civic organizations and boards, he’s served the industry with distinction. One of the original board members of the Treasure Valley Community College, Joe was also the first Nisei to be appointed by the governor of Oregon to the Oregon Board of Agriculture, where he sat as chair.

Joe headed up the Malheur side, with Doug McGinnis chairing the Idaho association. Joe recollected the motivation for starting the two associations, saying that the early 1950s saw bad marketing years, low prices and poor movement.

Some producers simply gave up, but those who hung on were supported by the associations and began talking about marketing. Ultimately the result was a federal marketing order adopted in 1957.

Joe was also very active in the National Onion Association, and Colorado onion grower Bob Sakata said he admired Saito for being “a top-notch grower himself.”

Joe has also been a Mason, Shriner, and he joined the American Legion and the Lions Club to contribute time and effort to the betterment of his community and for others.

OnionBusiness.com joins the chorus in wishing Joe Saito a hearty happy birthday, and to Joe and his bride Nellie we say thank you for your years of service and amazing achievements. 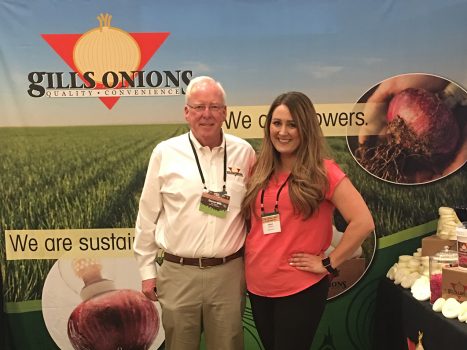