A truly unique industry story has come our way this week, and we’re blessed to share our conversation with onion and potato broker John Adams, who less than a month ago launched his own Atlanta-based company, John Adams Produce.

John, who’s been in produce for nearly two decades, has a solid background in onions that started with his first produce gig on the Atlanta Farmers Market. But what’s remarkable is a.) how he made the quantum leap into the wide world of produce from his former occupation as owner of a Palm Beach dry cleaning business, b.) why, now that he’s in his early 60s, John chose to start a company when many of his contemporaries are looking to retire and c.) exactly how he plans for the company to grow and prosper.

A major factor in each of the answers is his son, James. James, age 24, has Asperger syndrome, an autism spectrum disorder (ASD) that is shared by dozens of notables, including entrepreneur/SpaceX founder Elon Musk, the late biochemist/author Isaac Asimov and the late and great singer/songwriter John Denver. Like many other “Aspies,” James is gifted in technological know-how and language, and he’s “very outgoing – he’s just like Elon Musk,” John said.

The father/son produce business appeals to both John and James, who is currently employed at an Atlanta Target store.

“My goal is to make a good living with this, and I want to pass it on to my son. I want him to learn the produce business,” John said. “I’m going into this head-first, and hopefully I can leave something for my children.”

Daughter Jocelyn is in the foodservice industry, working for Carolina Ale House in Greenville, SC. And wife Dina, John said, “is 100 percent behind me.”

Dina and John have shared the same goals throughout their marriage, he said. They lived happily in Palm Beach, FL, for a number of years, with the dry cleaning chain enjoying a prosperous run. Among his customers were Donald J. and Melania Trump, whose 2005 wedding attire John made sure was cleaned and steamed and perfect for the ceremony. Over the years he also met the late radio talk show host Rush Limbaugh and several other in-the-news personalities.

But, he said, the business began to wane as his older customers moved or passed on, and he and Dina discussed moving in the early 2000s. “We sold the business in Palm Beach,” John said, adding that the decision to relocate to Georgia was made with Dina’s knowledge of the state’s education system.

“She wanted to move there for James’ and Jocelyn’s education,” he said, adding that Georgia had an excellent system for Asperger’s students.

After real estate brokers in Atlanta told him a dry cleaning chain in that city would not yield the same profit as one in Palm Beach, John related that news to an Atlanta friend who happened to be a USDA inspector for the Farmers Market. And that friend had friends who, he said, were interested in talking to the former dry cleaner.

“He said he’d told the people at General Produce my story, and they wanted to meet me,” John said. After the meeting, General Produce GM Jerry Wheeler asked John, “When can you start?”

A produce career was launched in November, and John stayed with General for more than a dozen years, eventually moving into the position of repack manager and then into buying and selling.

“It was a big move for me, my wife and my kids,” he said, adding that Dina, James and Jocelyn remained in Florida to finish out that school year and joined him in Atlanta several months later.

“It was one of the most wonderful experiences of my life,” he said of his employment with General Produce. “They were terrific, and I owe them a world of gratitude.”

Armed with sales background in multiple commodities, John went on after his time with General to work for other produce operations, narrowing his focus to onions and potatoes. In recent years he worked in sales with ProHealth, a McKinney, TX, potato grower, and with Cambridge Farms, a Boston-based potato and onion broker. He also worked with Owyhee Produce, a Treasure Valley onion grower/shipper.

His new company now works closely with several growers who are “house farms.” John explained, “That’s where our product will come from.”

Owyhee Produce remains his major onion grower, and he also brokers for other growers in the Idaho-E. Oregon growing region as well as Texas and California.

With 2020 in the rear-view mirror but 2021 coming with its own set of challenges, John Adams didn’t flinch at the thought of striking out on his own this fall. He’s sticking to his plan, selling to a healthy mix of wholesale/foodservice on the Atlanta Farmers Market and also retail.

“It’s pretty evenly split,” he said of his customer base. And he said while COVID-19 impacted sales significantly in 2020, he believes the forward motion in foodservice and the continued demand at retail will propel John Adams Produce.

“When COVID first hit, we watched sales drastically drop. People were panicking, and it really impacted the produce industry,” he said. As someone who recovered from COVID himself, John said he worked while he was sick and “got through it,” testimony to the work ethic he’s instilled in his two kids.

And his level of optimism has stayed high. “I don’t think there will be another lockdown. I hope for a fair and prosperous market, and it think it will be that way. And after the midterms next year, I think we’ll see some changes.”

He continued, “I just keep up hope that things will continue to get better. You have to be optimistic – I personally have to be able to get up each morning and say it will be a better day, that I am going to make it a better day. That’s the way I live my life.”

Speak up for your industry and support the Texas Market order 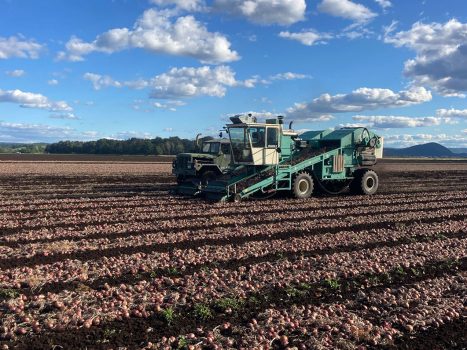