Ken Teramura and Ray Winegar inducted into Hall of Fame

Two lifelong Treasure Valley farmers were named to the Idaho/Malheur Onion Growers Hall of Fame at the organization’s annual meeting held Feb. 5 at the Four Rivers Cultural Center in Ontario, OR.

Ken Teramura and Ray Winegar, both born into Treasure Valley onion farming families, received the honors before a record crowd at the event’s luncheon ceremony.

Both men were born in Ontario, Ken on March 29, 1945, to Kay and Dorothy Teramura. A 1963 graduate of Ontario High School, Ken was an FFA member and was active in shop class. Commenting on his 1950s childhood, Ken said it was a time when homes didn’t have air conditioning, and AM radio was the chief form of entertainment – although pickup trucks didn’t have radios.

Changes have been aplenty, not only in basic comforts such as central air and digital music devices but also in the world of farming. Ken said when he was a youngster, even the planters of the day, Planet Juniors, “were not considered precision planting.” In today’s farming practices, iPhone technology has changed the world, and Ken said he’s glad “to have seen this change.” 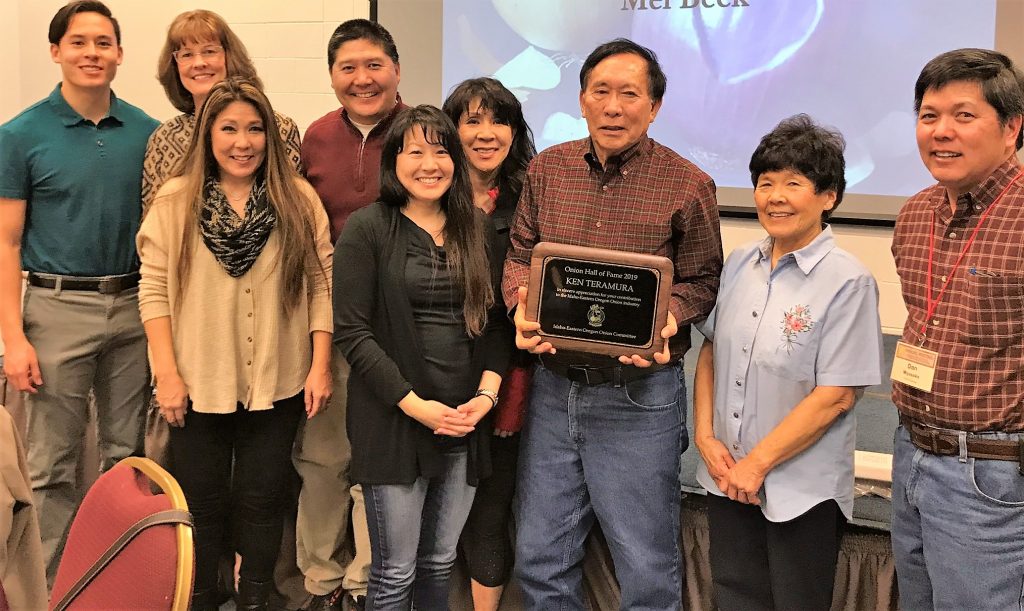 He credits his farming expertise to his two primary teachers, Kay and Yas Teramura, saying the two men were enjoyable to work with and willing to share their knowledge. He also credited Oregon State University (OSU) Extension and from the OSU Malheur County Experiment Station staff and agents, saying OSU has always maintained an excellent research staff in Malheur County. He lauded the Malheur County Onion Growers Association as well.

Graduating from OSU with a BS in Ag Engineering in 1968, Ken came out of college with a taste of budding computer technology, which he was helpful as his career moved along. He returned to Ontario and worked at Teramura Farms, later forming his own business, Ken Teramura Farms. In 1999 he, along with Kay Riley, Reid Saito, Les Ito, and Ross Nishihara, started Snake River Produce in Nyssa, OR.

Ken and Maxine Shiraishi, who met in high school, married in 1964 and have four children, eight grandchildren, and one great-grandchild. Their own children. Three of their grandchildren have pursued engineering careers; three are in college and two are in high school.

Very active in civic matters, Ken has served as president of the Japanese American Citizen League and treasurer of the Malheur County Onion Growers Association. He’s also served as a board member of the Water Resources Committee, and he is a trustee for the National Onion Association and is on the NOA Membership Committee, History Committee, and Meetings Committee.

And he is a proud lifetime member of the OSU Alumni.

Fellow 2019 Hall of Famer Ray Winegar is a third-generation Treasure Valley farmer born in Ontario on Jan. 7, 1944, to Earl and Ada Winegar. 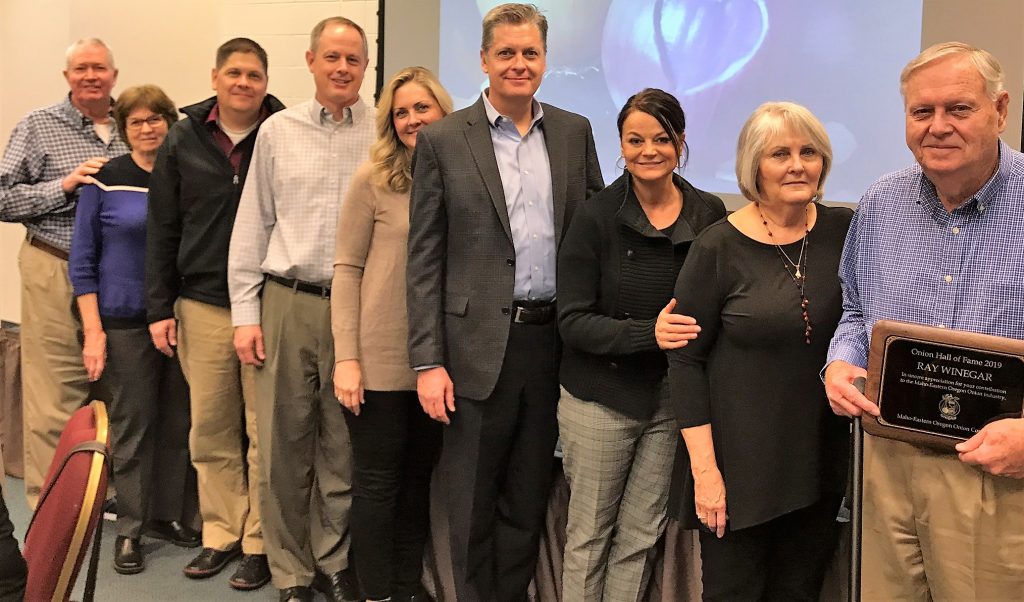 Ray Winegar celebrates his induction to the Hall of Fame with his family on February 5.

Recalling his childhood on the farm, Ray noted an event that took place when he was eight years old and a big help to his dad. The youngster was driving a tractor down the highway from an onion field to the home place, and because of his size he could either sit in the seat and steer the tractor or jump down off the seat and use the brakes.

You can perhaps guess the outcome: Ray made it into the yard of the home place where his dad’s new Packer stopped him. But the farm kid said his parents were happy that he wasn’t injured in the crash, and he wasn’t punished for smacking his dad’s new car.

Ray also attended Ontario High School and graduated in 1962. He played football and basketball during his high school years and was also involved in the Boy’s Federation. After graduating from OHS, Ray attended Brigham Young University in Provo.

At the end of his freshman year, he was diagnosed with the brain tumor that had to be surgically removed. But the young man recovered and returned to BYU, where he stayed until the end of his sophomore year.

A born and bred farm kid, Ray was in the fields “before college, during college, and after college.” In their early years of farming together, Ray and his dad stored and ran their own onions. Later they took the onions “to town” to be run.

Ray said early in his onion growing career, mechanical onion toppers were just starting to be used in harvesting. He purchased a topper from Ray and Al Saito in Weiser to help with his harvest, and the young farmer was excited about his new piece of equipment. But he was told by one onion packing shed that if he used the mechanical topper, they wouldn’t be able to take his onions to sell for him. Not one to give up, Ray found another shed that was willing to take his onions, and the rest is history. When he left onion farming years later, Ray he worked as an inspector for Rod and Trevor Frahm.

It was in 1966 at a church service at BYU that Ray met Vicki Tollstrup, and they were married Feb. 17, 1967. They have always lived in Ontario and are parents of daughter Sindee Melville, and sons Todd, Spencer, and Dean – and all three sons have farmed with their dad. Ray and Vicki also have four granddaughters and four grandsons.

Also very active in his community, Ray has served on the Malheur Drainage Board, and the Lower Ditch Board, the latter as a director and for a number of years president. He’s served as vice president of the Malheur County Onion Growers’ Association and on several occasions had the opportunity to travel to Washington D.C. as representative of the Association in conjunction with the National Onion Association.

And honoree Winegar has been a role model to the youngsters of the area, serving alongside Ken Teramura as a coach for a Little League Baseball team.

Onion meetings set in Utah and Michigan for Feb. 12 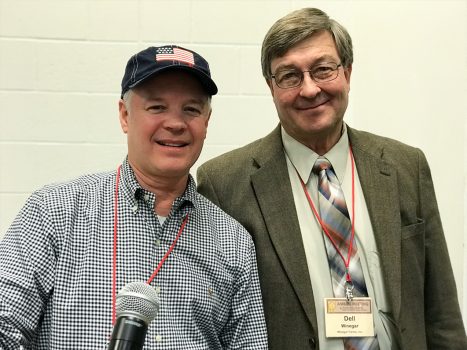