A story published on line Monday, May 9, at http://www.wtoc.com/story/31929474/onion-harvesting-game-changer-for-tattnall-county-farm provides an interesting take on how labor issues are changing the onion harvest landscape, specifically in South Georgia, this year.

According to a story for wtoc.com by reporter Dal Cannady, one farm in South Georgia is using mechanization to deal with the red tape that has legal worker documentation in a bind.

Cannady interviewed onion grower Gary Ray, whose farm is using mechanized harvesting instead of dozens of workers on its 400 acres. Ray told Cannady the farm’s crew leader applied for legal migrant workers through the federal program, and he said, “They denied us.”

A farmer in Mississippi had an onion harvest machine for sale, and Ray said so far this season it’s working out well. Onions are left to dry in the field “a day or two longer than usual to help them withstand bruising,” Cannady’s piece says. And the reporter notes the farm could “say goodbye to the federal program and leave them in the dust.”

Retail Snapshots for May 12 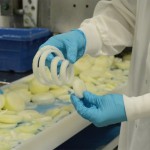