Ongoing difficulties in securing and keeping labor is moving many ag companies toward increased automation, with some onion shippers relying more on tech for grading and sorting.

Part of the JDC and Jongejans Luchttechniek company that originated in Holland and is owned by brothers Fred and Hugo Jongejans, the North American JDC branch was launched in Boise in 2012 by Fred Jongejans. Pariera came on board as the “boots on the ground” representative in 2013, and working with him from the Meridian office are Mike Mahler, operations manager, and newest team member Sean Curren, who came from River Point Farms in Hermiston, OR.

“Sean brings a wealth of knowledge from the grower/shipper standpoint, and Mike works directly with clients on automation,” Curt said.

JDC technology on the packing line has increased efficiency for a number of major players in the onion industry across the United States, including River Point Farms in the West and Bland Farms in Vidalia. In the Treasure Valley of Idaho-Eastern Oregon, JDC is working with several shippers.

The automation provided by JDC extends to the entire line. Electronic weighing uses a cup system and a roller system, with accuracy within a half gram, even at high speeds. The system auto-corrects for weight drift of each cup caused by machine swell, temperature differences and even dust build-up.

Sizing is calculated using multiple images, with software detecting the stem and the center of the onion and determining the diameter. Specialized algorithms determine the orientation of the product, noting diameter, length, curvature, surface and shape. And up to 10 onions per second can be measured.

Color sorting is high-tech as well, with the color module enabling specification of color on which the shipper wants to grade, using live feedback from high-res cameras.

External quality is graded through color and by the “intelligent quality module,” which distinguishes stem, mold, scratches and bruises just under the skin. And internal quality is assessed using “full transmittance technology,” which can illuminate the entire onion. According to company information, deviations such as internal rot can be determined accurately.

The line provides mitigation of dust-related problems and husk collection through its extraction system.

Integrated packing capabilities are also available, with customized systems to fill bins, bags and boxes. Auto palletizers are another service of JDC. All of these capabilities are adding up to a reduced need for labor and increased efficiency, Curt said, adding that increased production has been the result at Bland, and River Point was able to reduce labor.

“We’re working on Treasure Valley sheds right now,” he said, adding that the systems are geared to handle all sizes of onions. The equipment is manufactured in the Netherlands, with parts and service in the United States.

“The one thing we’ve learned is that every client has a different way of doing things, and so every project is customized. We work with our customers on every step, taking our experience and theirs and meshing it all together. Other companies like ours might pivot from onions to potatoes, but we stay with onions only, which allows us to focus on our product and our customers,” Curt said. 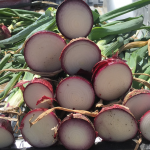