Cain Adams with Trinity Logistics/Longboard Logistics in Meridian, ID, adjacent to Boise told us in early September he was working with shippers in several production areas.

“We just finished up New Mexico and California,” he said. “Pasco, Prosser, Hermiston and the Treasure Valley are where we are loading and have been since Aug. 7.”

He noted that there’s been a large demand for flatbeds and Conestogas, adding, “This is because the weather has been great. No rain, lower day and night temperatures along with lower per-bag rates are being seen.” And, Cain added, “The onion pricing has also swayed customers to use flats over reefers. They have to land the load at a certain price. Sometimes that extra quarter to 50 cents helps them get it on the dock.”

When asked about the major receiving areas, he responded, “Our first few weeks we saw the Chicago area taking more out of Idaho and Washington. Atlanta, Dallas, Houston and Florida took their fair share. We are just starting to see Washington to California pick up. Idaho, too, started to ship to California this week.”

Terminals are approximately half of Longboard’s business, and Cain said, “We do have to watch ourselves this time of the year. With prices dropping, we have to be sure flatbeds are doing their job, temps are exactly as shown on the reefers and quality is there.  This is because some places are scraping by and don’t want to lose a dime.”

The team likes “to go to places we have been before. Some receivers have reputations for kicking product when the pricing is off or if someone offers a load at $2.00 cheaper. The past few weeks was a great time to take vacation for a lot of people in the business.” He went on to say, “We see pricing drop fast and know to focus on contract loads. Produce brokers have a hard time right about now. We think they will get busy soon though. Oct. 5-10 is the date range we look at. Weather is a big factor.”

Brokers want to see “blue skies and lower night temps,” and Cain said, “The Treasure Valley is getting just that, with 85-95 degrees in the day and the 50s at night. We are loving the low humidity it brings to dry the onions out.”

In addition to the Treasure Valley, Cain said Washington is a primary area shipping now. “We see Utah coming on in a few weeks, along with Colorado,” he said. “Trucks will be easier to get in those areas. Potato loads are pretty flat right now out of Idaho, so trucks will love loading out of Utah, which is where most get empty.”

And, “Goshen should start their own harvest, so I would say they hold back on orders from Washington and Idaho in the upcoming weeks. We have been shipping into Goshen and many to the Bronx.  I don’t know if the market is done toying with the onion pricing, but we know trucks are pretty easy to come by at great rates. Customers are asking for lower truck pricing, and trucks are asking for higher rates.”

Cain said, “Who am I kidding – trucks always ask for a higher price. Supply and demand is the name of the game for spot market trucks. We have a good supply and are keeping our regulars informed on the market conditions. We are asking them to get back in the lanes we work by Sept. 15.” 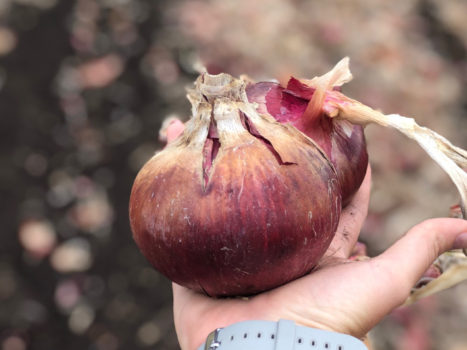 Market and Crop Update for September 5, 2019