Market and Crop Update for April 5

MARKET
Oregon:
Trish Lovell with Curry & Co. in Brooks, OR, told us on April 4 that Curry wrapped up its 2017 crop season. “We finished up our storage season last week,” she said. “Planting has started, and so far, the weather has been cooperative. Our acreage will be the same as last year, and we’re hoping for a more favorable growing season, with a little more sunshine and a little less rain.”

Idaho-Eastern Oregon:
Jason Pearson with Eagle Eye Produce in Nyssa, OR, said on April 4 that demand is good. “Demand has been very good this week, particularly for jumbos in both yellows and reds,” he said. “The market is a little lower than what it should be right now, but with more sheds finishing, there is potential for the market to increase.” Jason said Eagle Eye has availability of yellows and reds in all sizes, adding, “We will be shipping until April 20, and our quality is still very, very good.”

Dwayne Fisher with Champion Produce Sales in Parma, ID, said on April 4, “Just as promised we are finishing up, actually a week earlier than we had planned on. Overall we will be way off in shipments for the year for our group, but we knew that given our limited volume that came in from the field. Reiterating what I have stated before, I really think we did a much better job marketing our crop when we were in the driver’s seat.” He added, “We plan to transition into the Imperial Valley April 16, and the crop looks to be excellent.”

Mexico/South Texas
Derek Ennis with L&M Cos. in Raleigh, NC, told us April 4 reports that L&M is winding down its shipments of Mexico onions out of South Texas, although the company is still shipping some onions from the region. “We will be shipping out of the area for the next couple of weeks to keep our customers in onions until we transition to our new crop in California,” Derek said.

Don Ed Holmes with The Onion House in Weslaco, TX, said his Mexico deal is still “running steady.” On April 4 he told us, “A few shippers have finished out of Mexico. Two or three got out, but one big guy got in, and we’re running steady. We have this week and next week, and then it’ll start to fall off.” Don Ed said Onion House growers will clip Texas onions on April 5 and 6, and he said, “We’ll run some next week.” He noted with some shippers in Washington and Idaho-Eastern Oregon finishing up the 2017 crop, “I think we’re right around the corner from a stronger market.” He added that he expects prices to be stronger “two weeks from now” if other areas “aren’t in a big hurry” to come on, and he said Texas will be running more onions in the next couple of weeks. “Texas is still having trouble with trucks, but we’re doing good in comparison to other areas.”

Wisconsin:
Doug Bulgrin with Gumz Farms in Endeavor said on April 4, “We have seen a big increase in demand this week. We continue to have a good supply of yellows and we will be shipping into early May.”

Crop News:
California:
Derek Ennis with L&M Cos. in Raleigh, NC reports that L&M’s California deal will start up April 16. “We should start harvest on April 16 and start packing on the April 19,” Derek said. “We are really excited because this will be one of the earliest starts we have had in California. We have had ideal weather. The stands look great, and the onions are sizing up well.”

Jason Pearson with Eagle Eye Produce in Nyssa, OR, told us that Eagle Eye’s Imperial Valley deal will start up mid-April. “From what our growers are reporting, the Imperial Valley crop looks excellent,” Jason said. “We will transition there at the conclusion of our IEO deal. After that, we’ll move back up Idaho-Oregon.”

Idaho-Eastern Oregon:
Dwayne Fisher with Champion Produce Sales in Parma, ID, said on April 4 that on the company’s farm side, “We have finished all planting for the year – a month ahead of last year! Mother Nature has been much nicer to us this season, and we are hopeful for a great summer and an early start for our crop in August of 2018. Time and weather will dictate that, but we are off to a favorable start.”

Grant Kitamura with Baker & Murakami Farms in Ontario, OR, told us that the growers are nearly all planted. “We are about 90 percent in the ground,” he said. “The weather has been really good this year, and we have been able to stay on track with planting.” Grant went on to say, “We have reports that there are some early onions that already at flag stage, and that is very promising for a good early start to the season. As I mentioned earlier, there is plenty of water to go around for the crop, so we are on track for a great growing year.”

New Mexico:
Derek Ennis with L&M Cos. in Raleigh, NC, told us the New Mexico crop is a little late. “Normally, we get started with New Mexico onions around the last week in May,” Derek said. “But the area has had some rain which will put the start date around the first week in June. This is actually a good thing because it will make a very smooth transition between California and New Mexico.” He said the crop is shaping up nicely, adding, “The crop looks good, and with help from Mother Nature, we should have a great season.”

Northern Colorado:
Bob Sakata at Sakata Farms in Brighton told us on April 4 the direct seeded onions are starting to emerge. “Wherever we have water, they’re doing great,” Bob said. He added that the Front Range has been very dry, and Sakata Farms is irrigating. This year, Bob said earlier, the operation could be shipping in August.

Colorado Western Slope/Utah:
Don Ed Holmes with The Onion House in Weslaco, TX, said the West Slope is “rocking and rolling” with its planting, and Utah is “about half in.” He added, “Everyone is right on schedule. Colorado generally starts shipping after Labor Day, and Utah ships in October.

Kansas:
Derek Ennis with L&M Cos. in Raleigh, NC, told us that L&M start planting last week. “We are excited about our Kansas crop because this year we have increased our planting by 40 percent,” he said. “We should be planting in Kansas for the next couple of weeks.”

Vidalia:
Danny Ray with Ray Farms in Glenville, GA, provided his crop update with a great deal of enthusiasm and excitement. “I am pleasantly surprised at how this year’s crop is turning out,” Danny said. “Given the winter we had, I really didn’t know what we would end up with, but the crop looks so nice. The onions are sizing up, and it’s a very clean crop too.” Danny said Ray Farms will be ready for the official start date on April 20. “We wouldn’t want to start any earlier,” he said. “We will need the time to get things plowed up and the onions dried out so we can ship a top quality product.” Danny added, “Buyers are as excited as we are. Since the start date was released, we are getting plenty of phone calls from interested customers.”

Many thanks to Danny Ray for provided this week’s feature image and those included below, highlighting recent Vidalia crop progress. 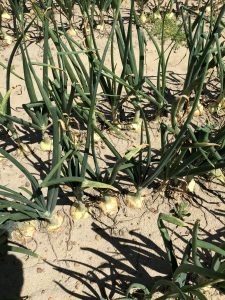 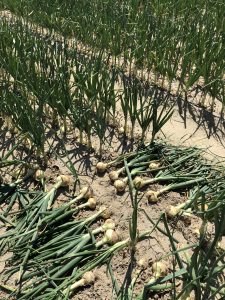 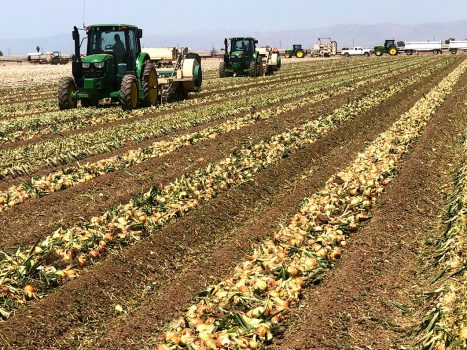