Market and Crop Update for August 10

Washington:
Trish Lovell with Agri-Pack in Pasco told us Aug. 9 it’s been “CRAZY busy here!” She said the operation is now running new crop yellows and reds, along with new crop potatoes,” and she added, “The onion market had remained strong up until this week. Yellow and red prices have softened as other shippers start up in the Northwest.” Trish noted that California and New Mexico “are trying to finish up,” and she said, “Quality has been very good with our early crop.” The region has been dealing with extreme temperatures, but Trish said crews are “seeing a light at the end of the tunnel for next week, with highs in the mid 80s to low 90s and lows in the 50s — great weather for harvest.” She said yields “appear to be average, with good size profiles.”

Dan Borer with Keystone Fruit Marketing in Walla Walla said Keystone started shipping its hybrid onion crop earlier this week. “We started shipping reds, with yellows and whites to follow,” he said. “We can’t speak for the region, but our quality is looking good, even with some of the heat challenges the Northwest has had. It looks like we will have a standard program, shipping through the end of the year and possibly into the first part of 2018.”

Washington Walla Walla:
Dan Borer with Keystone Fruit Marketing reported to OnionBusiness from his office in Walla Walla on Aug. 9 that the Walla Walla season has been very good for Keystone. “We are nearly at the end of our Walla Walla season,” he added. “We will be shipping through about the end of August.” Dan said quality has been very good, and “Overall it’s been a very good season. Sales have been brisk, and pricing has also been good. The Northwest has had heat issues, but our growers have done a great job of handling it and we haven’t had any issues with our product.” Walla Walla size profiles are heavy to jumbos, and he said, “We also have plenty of colossals, too.” 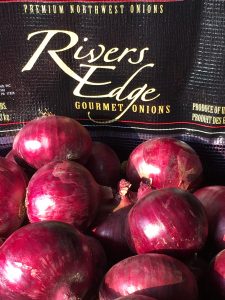 Northwest Sweets:
Dan Borer with Keystone Fruit Marketing in Walla Walla, WA, said Keystone has started its “Local Northwest Sweets” program, and he noted, “We started harvest and will begin shipments the third a week in August.” Dan continued, “Growing conditions have been good. We had a wet spring and dry growing conditions this summer, which onions love. So far, everything is looking very good.” Northwest Sweets are available from mid-August through the holidays. “We generally ship our Northwest Sweets to almost Christmas,” Dan said.

New Mexico:
Bernie Pavlock, director of sales for Hailey, ID-based ProSource, said ProSource will continue shipping out of out of New Mexico for the next 10 days to two weeks. “We are very proud of our growers at Rio Valley,” he said, noting the crew has “done an outstanding job this season.” Bernie said Rio Valley packed from a new facility and increased volume. “The onion quality has been excellent, and the New Mexico season is considered a complete success,” he said. 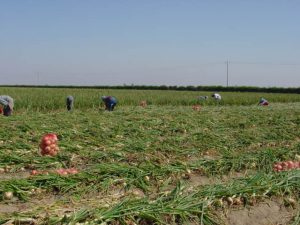 Peru:
Dan Borer with Keystone Fruit Marketing in Walla Walla, WA, said shipments of Keystone’s famous Mayan Sweets out of Peru have landed on the East Coast. “We are packing now on the East Coast, and customers are looking to transition from the Vidalia storage crop to our Mayans,” he said. “This year’s crop growing conditions have been normal. Based on last year’s returns, we may see reduced volume, but there will be promotable supplies through the holidays, so our customers can feel confident that they will have the access to the Mayans they need.” Dan said Mayan Sweets are starting to arrive on the West Coast into Los Angeles and Seattle, and shipments should begin around Labor Day.

CROP
Utah:
Don Ed Holmes with The Onion House in Weslaco, TX, said the Corinne crop is “looking great.” He said, “The grower is really happy and says he’ll start harvest the first or second week of September. The onions will go into storage and then start shipping sometime between late September and early October. And Colorado will take us right up to that and will also continue shipping.”

Colorado Western Slope:
Don Ed Holmes with The Onion House in Weslaco, TX, said his Western Slope grower is looking at possibly the second-earliest clipping date ever, with shipments to start three days after that. “John Harold told me he believes he will start clipping on Monday, Aug. 21,” Don Ed said on Aug. 9. “We should have onions to sell that Thursday, Aug. 24. These are intermediates, and Colorado intermediates are some of the prettiest onions out there. We’ll start with yellows, which John Harold said are sizing generally to jumbos. And then we’ll have reds and whites a bit later. They’re sizing up well, too. We’ve had a lot of people calling for them,” he said. Recent rains in Colorado have not slowed the onions, he noted. “The onions are all drip, and if they do get some rain, it doesn’t cause any damage.”

Mexico:
Don Ed Holmes with The Onion House in Weslaco, TX, said his growers in Tampico have will be transplanting from seedbeds in September and October. “Some of the onions in the seed beds are already up,” he said. Don Ed said the region could get some rain from Hurricane Franklin, which crossed the Yucatan on Monday as a tropical storm, gained intensity and was set to make landfall on the Mexican mainland Wednesday, Aug. 9. According to reports from Accuweather, the storm was expected to hit south of Tampico and north of Veracruz, and heavy rains were expected to affect Mexico City.

Idaho-Eastern Oregon:
Resources told OnionBusiness this week that though there are a few onions being shipped from the area currently, most shippers will begin the third week of August through the first part of September. We will keep you posted as more shippers jump on for the 2017-2018 season. 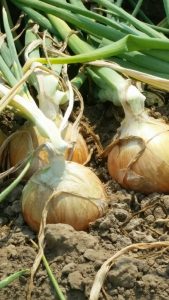 Grant Kitamura with Baker & Murakami Produce Co. said on Aug. 9 that the onions are sizing up nicely. “We have had milder weather lately,” he said. “It’s been in the 90s during the day and cooler at night, which is ideal for onion growth. Right now we are behind schedule, but that said, we are very pleased with how the onions are finishing.” Grant told us Baker & Murakami Produce Co. will begin packing the week of Aug 20. “The weather forecast for September and into October is warm, so we anticipate we’ll have good curing to the onions,” he said. “We’re confident our customers will be very happy with this year’s crop.”