MARKET
Kansas/Washington/Idaho-Eastern Oregon:
Derek Ennis with L&M Companies in Raleigh, NC, reported on Aug. 22 that demand had been slow earlier in the week. “Monday and Tuesday were pretty slow, but today demand has picked up a little,” Derek said. “Basically, everyone is waiting to see what the market is going to do with all the transition.” He said demand and the market are good for big onions. “The colossal and super demand is very good, and the white market is very strong. But reds have fallen off some. There are a lot of reds out there.” Derek added that L&M’s Kansas program is in full swing. “We are in the middle of harvest now, and the onions look excellent,” he said. “We have had a little rain that slowed us down, but we are back in the fields today. Luckily we dodged a bullet on the hailstorms. We had about an acre that was hit with hail, but that was a long time ago. Now, we just need the fields to dry out from the rain so that we can keep on track with harvest.” Derek said that the Washington crop quality is very good. “We do have quite a few smaller onions coming out of Washington, but that’s typical for early in the season, and we expect that crop to gain size as we get further into the season.” He noted that L&M is brokering a fair amount of onions out of Idaho-Eastern Oregon, and the season is off to a good start there as well.

Washington:
Doug Bulgrin with Gumz Farms in Endeavor, WI, reported Gumz is moving some Washington product while its Wisconsin crop finishes. “Demand has actually been above average, and the market is steady,” Doug said on Aug. 22. “We are seeing stronger demand for medium yellows right now. The quality is looking very good too.”

Oregon:
Trish Lovell at Curry & Co. in Brooks told us the 2018 shipping season is underway. “Moving forward, we are packing reds now, bringing in bulk yellows and sweets,” Trish said on Aug. 21. “We’re getting a little bit of a slow start due to adding equipment, but demand appears to be good. I’m being optimistic we will see a good onion season this year. So far, we have not experienced any issues with transportation.”

California:
Steve Baker with Baker & Murakami Produce in Ontario, OR, said that company’s California deal will continue until the end of August. “Demand out of California has slowed down this week as buyers are starting to switch to onions out of the Northwest,” Steve said on Aug. 22. “Demand is greater on colossals and jumbo yellows than medium yellows,” he said, adding, “The market has been steady so far this week, and we have had good availability on medium yellows and small jumbo yellows.” Steve said supplies are tight on good-size jumbo yellows.

Idaho-Eastern Oregon:
Steve Baker with Baker & Murakami Produce in Ontario, OR, said demand for Idaho-Eastern Oregon onions is good this week, adding, “Our customers are happy we have started up.” He said, “Demand has been good on all sizes and colors. Demand on jumbo yellows has been stronger than most other sizes for the week, and the market has been steady so far this week.” Both quality and availability have been good, and Steve said, “We are starting to get booked out for the week on jumbo yellows.” As far as transportation, he said, “Trucks are starting to get tighter as more shippers are starting up.”

OnionBusiness.com managed to catch Jason Pearson with Eagle Eye Produce in his Nyssa, OR, office between sales calls on Aug. 22, and he reported that demand at Eagle Eye is extremely high right now. “Demand is very good this week,” Jason said. “The market is steady, and jumbo yellows are really moving.” He said Eagle Eye hasn’t started whites but is in full swing with reds along with its yellow program. “We have a good supply of colossals and supers, but we are very tight on mediums right now,” Jason said. “We have had good weather for harvest, so things are going well there, and the quality is great with our early onions.” Regarding transportation, Jason said, “So far, so good. Transportation is a little tough, but we’re getting it done.”

Chris Woo at Owyhee Produce in Nyssa, OR, told us Aug. 22 that company, which started the new season July 23, is moving all sizes and colors now in its early onions, and shipments are going coast to coast. Chris said demand is good and pricing is “decent on reds and whites, not quite as strong on yellows but still good.” Noting that New Mexico is cleaning up and California is slowing down, Chris said the trade “should be switching up to the larger size profiles.” He added, “We’re seeing very good quality in packing and in the field.” And, he said, “We have very good sizing with jumbos, colossols and supers.” Owyhee will move into storage onions in mid-September, he said. And he added that weather has cooled in the Treasure Valley, dropping from triple digits to the high 80s and low 90s.

Colorado Western Slope:
David DeBerry with Southwest Growers/Onions 52 in McAllen, TX, said on Aug. 22 that Coal Creek Produce in Montrose starting bringing in intermediates that day, with reds to start shipping next week. “Sizing is good,” David said. “There are not a lot of supers. It’s mostly a jumbo deal with a few mediums and a few colossals. Quality is very good.” He said the red market is good, and whites are very strong. “Colorado’s shipping point location helps with freight costs, and that’s an advantage,” he said. David also commented on planting that’s underway in Mexico, and he said South Texas is about six or seven weeks away from planting.”

Broker’s Perspective:
Jason Vee with Vee’s Marketing in Lake Nebagamon, WI, told us Aug. 22, “Things are going well in Washington. Quality is good on all colors with the occasional defects typical during harvest season.” He continued, “I slowed down quite a bit this week. I expected northern regions in the Midwest and Canada to gap longer, at least until Sept. 1, but it looks like that’s about finished. Even though I’m slowing down, there was some scarcity on medium yellows recently. That’s a good sign that demand is still strong. It’s not enough to warrant a market increase, but harvest season can be bad for market condition. So, any scarcity in August is a good sign for the market.” 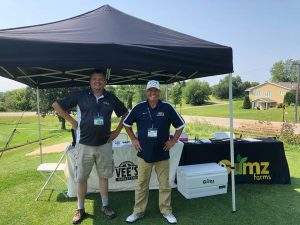 Jason continued, “I’m a little concerned about reds, however. They aren’t crashing, but they are still declining. We are miles away from the $14 FOB 25# jumbo reds of a month ago. But we knew that price wasn’t sustainable. I think there is a precept by some growers that brokers like myself don’t care about whether the market is high or low, or that brokers push down the market. It’s not true.”

Thanks to Jason Vee for sending a photo of Doug Bulgrin with Gumz Farms (left) and Scott Vee with Vee’s Marketing (right) at a recent customer golf tournament where the two firms shared a hole sponsorship.

CROP
Northern Colorado:
Bob Sakata with Sakata Farms in Brighton had somber news on Aug. 21, telling us, “We got hit hard on Aug. 14 by hail. It’s wait and see, but right now we’re looking at about a 60 percent loss in tonnage.” Bob continued, “I’m fortunate that I’ve been in the business for 65 years, but I feel for any young farmers who are just getting started.”

Western Colorado:
Don Ed Holmes with The Onion House in Weslaco, TX, said his Western Slope grower is on track to start moving onions the Tuesday after Labor Day. “He’ll start with intermediate yellows, followed by whites two days later and reds at the end of the week,” Don Ed said. The crop looks good there and in Utah, where the season will kick off in late September. Don Ed also said onions are coming up in Mexico.

Wisconsin:
Doug Bulgrin with Gumz Farms in Endeavor reported on Aug. 22 that Gumz will start harvesting a few onions toward the end of this week. “Though we are a couple of weeks behind, things are really shaping up nicely, he said. “The onions are sizing up well. In fact, size looks like it will be better this year. We should start packing around Sept. 10, and our customers are looking forward to starting their local Gumz programs.”